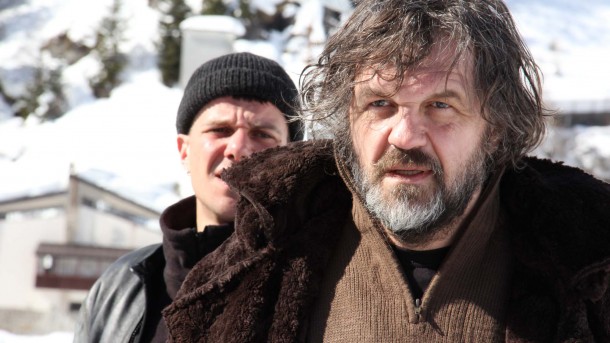 The feisty Bosnian actor and director Emir Kusturica (Time of the Gypsies) is the reason to see this dourly sinister revenge thriller set in the wintery mountains of the Trentino Alto Adige, Northern Italy. He plays Secondo, in name and in nature – as this is not a lead role despite his being the best-known actor here. A Serbian national, he lives in a snowbound power plant next to the Slovenian border and runs a clandestine human trafficking outfit with half-brother Lorenzo (Adriano Giannini). A pre-credit sequence from 1994, shows the murder of a Serbian man by human traffickers whilst his little brother escapes, and we are led to believe that Secondo is the key contact involved in illegal immigration and money laundering in this remote location.

When young mechanic Pietro (Domenico Diele) arrives in the village to repair a dodgy electricity cable, the others become uneasy eyeing him with a savage mistrust. And it doesn’t take long for us to realise who Pietro really is, particuarly when Lorenzo suddenly disappears. Suspicions are further aroused with the arrival of Lana, a Slovenian (Ksenija Rappoport) forest ranger on the hunt for a dangerous bear: it soon emerges that she is really a detective investigating the disappearance and murder of a Libyan woman.

Claudio Noce does his best to ramp up tension in this confident, well-paced second feature, with a series of revelations that keep us on our toes to a degree, while admiring the Alpine setting with its icy landscapes and sweeping aerial photography of  a majestic dam over the valley. Performances, particularly from Kusturica and Rappoport, are strong and although the script could benefit from being tighter, there is a constant threat of skulduggery with animosity brewing between the predominantly male cast involved in cross-border intrigue and illicit subterfuge. An unexpected twist develops between Pietro and Lana adding a frisson to the proceedings and marking out Pietro to be a wolf in sheep’s clothing and far from the unassuming character who originally came to town. In the brutal climax of this watchable Noir thriller, it becomes clear that the village victims are not going to be of the bear variety. MT