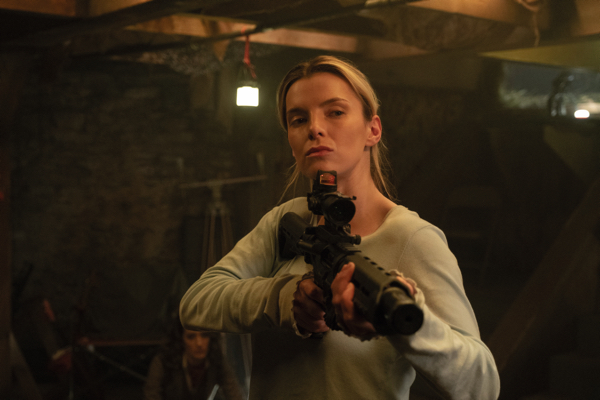 Twelve strangers wake up in a field. They don’t know where they are, or how they got there. Their fate is soon revealed in a terrible game called The Hunt. And they are ‘The Deplorables’.

Adapted from Richard Connell’s often-filmed 1924 short story The Most Dangerous Game, The Hunt is a classic Blumhouse schlocker. Connell’s short story was first adapted for the screen by Ernest Schloedsack in 1932, starring Fay Wray – both turning up again for the first King Kong version. Twelve years later Orson Wells based his CBS radio play on the material; and more recently, Italian director Elio Petri took the helm on The Tenth Victim in 1965, starring Ursula Andress and Marcello Mastroiani. But all these are pure entertainment movies – with perhaps a little nod to social conflict. Only The Hunger Games trilogy, based on Suzanne Collins’ novels, has a direct political undertone. When Universal withdrew The Hunt, scheduled to be premiered last September, two reasons were given: the mass shootings at Dayton and El Paso, and President Trump’s intervention, proclaiming that The Hunt showed “liberal Hollywood” as its worst (again).

Craig Zobel (Compliance) is the latest to have a bash at a film version and makes a good go of it with his writers Nick Cuse and Damon Lindelof. ‘The Deplorables’ team is fronted up by Crystal (Gilpin) who has served as a soldier in Afghanistan and runs rings round the hunters’ hired hands. Their leader Athena (Swank) makes a spectacular mistake: She was supposed to include a no-hoper, also called Cristal, in ‘The Deplorables’ team – instead she chose Crystal with a ‘y’; during the final duel, the women scope out which of them best resembles Snowball from Orwell’s Animal Farm (based on Stalin’s opponent Trotsky). Other oddities are the reconstruction of an Arkansas petrol station in Bosnia, and Crystal’s long rendering of the ‘hare and turtle’ nursery rhyme. Crystal is forced to eliminate the other members of her group, who are supposed to be on her side, but are really ‘the enemy’.

The horror element here is more camp than anything, and the absurdities make it easy to classify The Hunt as comedy-horror; names like Yoga Pants (Roberts) and Vanilla Nice (Simpson) setting the tone. Yet, Zobel’s commitment to the task is admirable: his madhouse ensemble is able to fight with irony as their weapon of preference. DoP Darren Tiernan (HBO’s Westworld), conjures up parallel worlds which are as beautiful as treacherous. Gilpin’s Crystal has the leadership talents of Stakhanov and Machiavelli combined, and although The Hunt may not be a masterpiece, it represents solid entertainment for genre fans – with a touch of acid. AS

THE HUNT IS OUT NOW