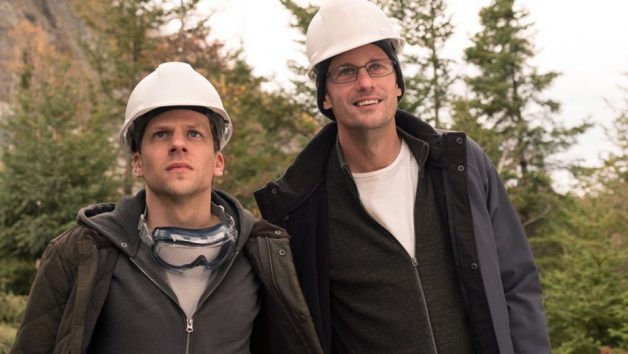 Meanwhile the two cousins have a secret money-making plan of their own. It involves the construction of a high speed fiber-optic cable that allows information to travel in a nanosecond (the beat of a hummingbird’s wing) so stockbrokers can beat their competitors hands down.

Although it sounds rather highfaluting, this is a slick and intelligent film that explores the humanity in a high octane premise, even finding humour in those dark nights of the soul. Salma Hayek is Eva Torres, a wacky but believable City whizz babe with roots as dark as Kunta Kinti. Her ironic approach to her uptight character is one of the highlights here along with. Jesse Eisenberg whose suave sales patter barely hides an existential angst of his own and in his element as a man under pressure, fronting up a dicey operation with considerable aplomb while everything around him  is in doubt. Meanwhile Anton (Alexander Skarsgard) is the hypochondriac nerd helping him to pull off the scheme with conviction — and even though we know the project is outlandish – it very much buys into the zeitgeist. There’s a angsty atmospheric score by Yves Gourmeur that primps the tension and then mollifies it in all the right places.

Half way into the story, Vincent decides they should both resign from Torres’ employ and focus on their own project, finding investors for their new-fangled cable, and trousering the profits. But this is easier said than done, and Vincent’s tip-top negotiating skills are soon compromised by his deteriorating health.

The seemingly unfeasible project involves drilling a line horizontally under private land, a logistical nightmare that involves endless red tape and deep pockets on the financial front. Vincent schmoozes the home-owners, contractors and drillers, while Anton disappears into the world of computer coding, hilariously oblivious of his wife’s increasingly histrionic  demands. Clearly on the spectrum, Anton is mesmerised by his work,  Skarsgard fashions a fascinating portrait of emotional detachment that almost borders on autism.

Clearly Hummingbird has issues quite apart from its outlandish premise and tonal flaws, but this is an engrossing study of ambition, perseverance and the human desire to make one’s mark, however challenging, or unfeasible. Nguyen manages to humanise the much maligned world of finance and technology by deconstructing those struggling with their demons both physical and mental. He does so with a quirky vein of humour making The Hummingbird Project an enjoyable and original watch. MT