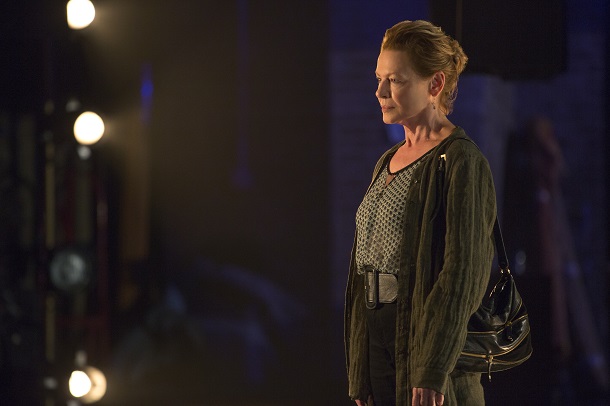 In Levinson’s adaptation of the novel by Philip Roth, Simon Axler, a famous actor on the wrong side of 60, loses his craft and his love of the theatre. After a black-out he collapses into the orchestra pit and ends up in a posh sanatorium. There he meets Sybil, one of the patients, who wants to pay Simon handsomely to kill her husband, who has molested their daughter. Simon declines, but Sybil returns during the rest of the film, to talk him into the killing. Simon could do with the money, because he is broke. After returning home to his country mansion in Connecticut, he is visited by Pegeen (Gerwig), the daughter of an actress Simon had an affair with more than 30 years ago. Megeen, who is a lesbian, had a life long crush on Simon, and they start a rather one-sided relationship, in which the aging actor plays the role of a sugar-daddy, while Megeen still sleeps with women – hardly surprising when one considers Axler’s physical state. Finally, Simon has the choice between a hair replacement commercial and the title role in King Lear on Broadway. Choosing the latter, and wanting to father a baby with Pegeen, brings Simon again too close to the abyss.

This is a glossy, beautifully crafted drama in which Levinson shows us that leaving the sanatorium makes no difference to Simon: inside he had only Sybil to contend with, but in his own home he has Megeen on his hands, who literally drives him even more crazy. She wants all, material and attention-wise, and her moods are violent. Axler is caught between his own loss of reality, his wishful phantasies and his rapidly declining body. A crippled man, playing the teenager in an old body and a disturbed mind. Pacino is superb, he fights the dying of the light for far too long, always wanting a little stay from execution. He is so caught up in himself and his delusions, that he can not see what Pegeen is doing to him. In his mind he is still a much younger man, able to cope. Gerwig is dominance personified, crushing Simon, like her former lovers.

Shot in only 20 days near Levinson’s own house in Connecticut, THE HUMBLING has a freshness that suits the narrative: we are rushed through the last rites for Axler, his life violently fragmenting around him: past and present, all the stories of life and theater merging into one in the old actor’s mind. His fears and wishes are dangerously close, his imaginations haunting him. The vivid and innovative camera supports his descent into a private hell. AS

THE HUMBLING IS SHOWING AT VENICE INTERNATIONAL FILM FESTIVAL FROM 27 August to 7 September 2014. Follow our coverage under the FESTIVALS banner.