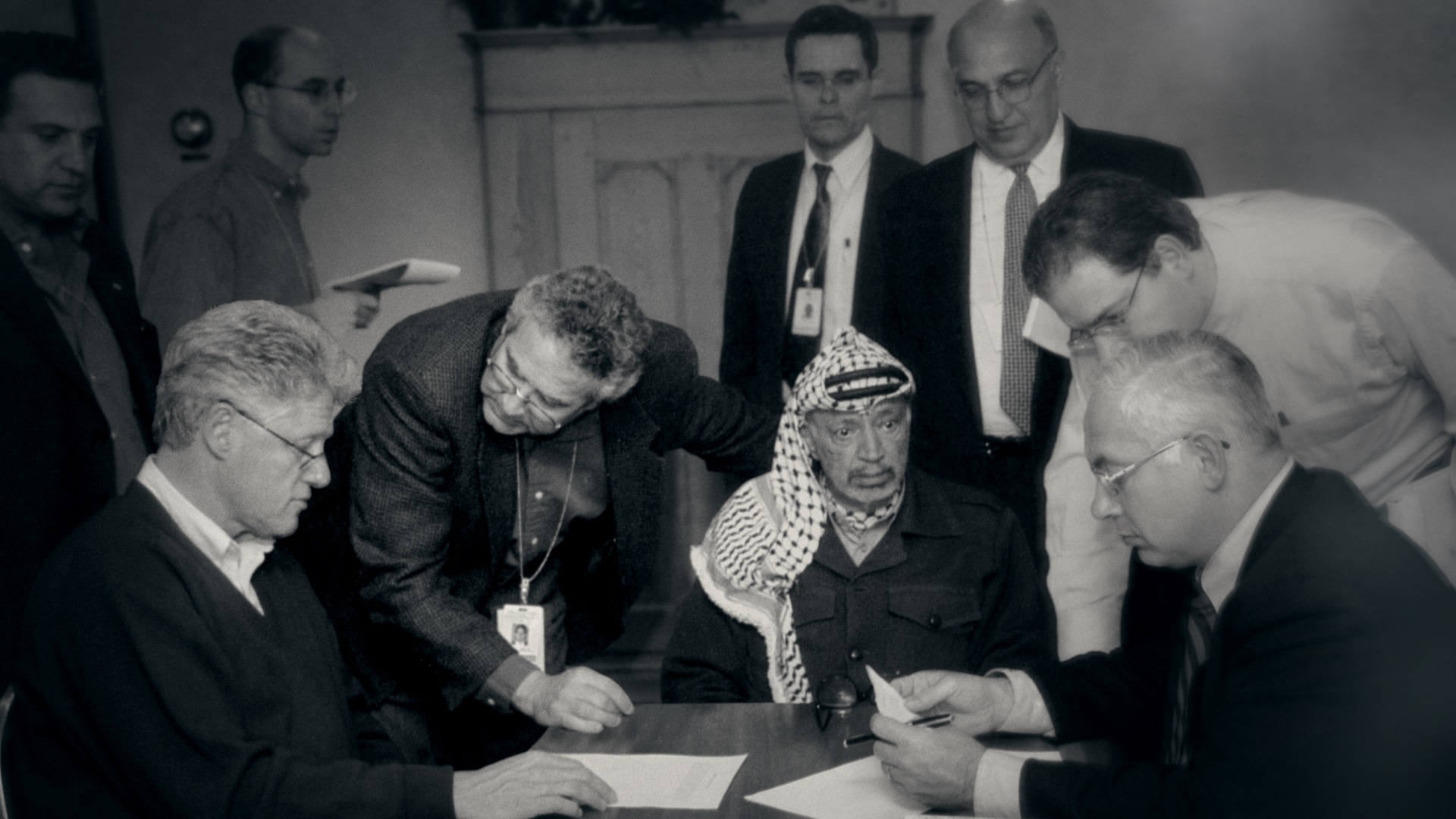 Israeli documentarian Dror Moreh (The Gatekeepers) takes a look behind the scenes of the US-led peace mediations between Israel and Palestine, revealing failure on an epic scale, starting under the administration of President Herbert W. Bush and his Secretary of State, James Baker.

The wake up call to pursue his documentary project coincided with the assassination of one of the main protagonists of the peace process, Prime Minister Yitzhak Rabin, who was killed by an orthodox religious fanatic at a peace rally in Tel Aviv on 4th November 1995, also Moreh’s birthday.

When Bush senior came to power he inherited a new world order: the Cold War had ended in 1991, leaving the USA as the only world Super Power. But President and his Secretary of State still faced unsurmountable difficulties. Baker was known for “getting things done”. He succeeded in getting Israeli and Arab state leaders around the table – a first – but that is as far as it got.

The major part of this documentary is devoted to the efforts of the Clinton administration who felt they had a real chance of success. Mediator Dennis Ross (still affected emotionally by Rabin’s murder) and his chief assistant Aaron David Miller really felt they had the bit between their teeth during some positive years of negotiation but they couldn’t bring things to a satisfactory conclusions. There were two elections in 1992, as Baker stated, “the first one was won by the ‘right’ person, Yitzhak Rabin”.

November 1993 saw Bill Clinton beat George H. Bush to the presidency, which meant an exit for James Baker. Miller was of the opinion that peace could never be achieved between two sworn enemy states at war since 1948, and using the word “peace” would always doom the process to failure.

The preparation for a meeting between PLO leader Yasser Arafat and the US mediators was farcical, the Arafat team were filmed watching the US Soap ‘Golden Girls’ on TV. When Arafat and Rabin first got together on September 13th 1993, most of the meeting was taken up with ironing out the many pre-conditions set by the two men: Rabin agreed to shake Arafat’s hand (whilst keeping him away with his other hand), in exchange Arafat had to forgo his uniform and his gun. In the end he wore a Safari suit and promised not to kiss Rabin.

The body language between the two leaders spoke of their mutual distrust. But by 28th September 1995, when both men signed the “Oslo B Agreement” this had all changed. In a a speech at the reception, Rabin called “Arafat close to being Jewish, for excelling in Israel’s national sport of speech-making”. A month later Rabin was dead. His successor, Shimon Peres, lost the election to ‘Bibi’ Netanyahu (Likud) who was not interested in any long term settlement. In 1999, Ehud Barak’s Labour Party came to power. A general like Rabin, he withdrew Israeli troops from Lebanon and gave the Clinton administration new hope, but the Monica Lewinsky scandal weakened his credibility, and he only just avoided empeachment.

Barak stated openly that he was negotiating in the spirit of Rabin. At the Camp David Peace talks in 2000, he pushed for Arafat to sign over control of the largest Mosque in Jerusalem to Israel – which would have led to a Fatwa being placed on the Palestinian leader. Arafat later wrote to Clinton, calling him ‘a great man’, but Clinton’s response was that he “felt like a failure, because you made me one”. The American negotiators, many of them Jewish, believe in hindsight, that they acted more like lawyers for the US government, viewing the world “as they wanted it to be, not like it really was”. Failure continued to dog the administrations of George W. Bush and Barack Obama who were both complete non-events when it came to a peace settlement. Donald Trump did no better, and actually poured oil on troubled waters particularly on the West Bank.

Moreh ends on a sober note, stating that the demonisation of the enemy has led to growing intolerance. According to Amos Gitai, Arab children associate Israelis with a gun culture, some of them never even seeing a Jew without a weapon. And both sides still claim the right to military intervention. The martyr death of Yitzhak Rabin seems, sadly, to be in vain. AS