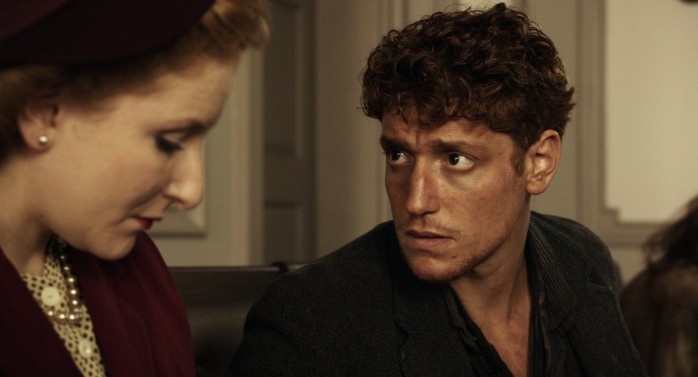 TV director/producer Mike Fraser makes his feature debut with a biopic drama of the aristocrat and socialite Elizabeth Montagu (1909-2002) that has the style of a 1950s Miss Marple movie, or Foyle’s War without the talents of Michael Kitchen.

Born on the estate of Beaulieu in Hampshire, she would have succeeded her father, the Third Baron Montagu to the title, if he would not have fathered her half-brother with his second wife, after the death of Elizabeth’s mother. Called “little fellow” by her father who clearly wanted a boy, Elizabeth (Myer-Bennett) rebelled early on and became an able car mechanic, replacing the broken fan belt in her father’s car successfully with one of her stockings. Later she went to RADA and played in Reps in Newcastle, before having a stage career in London’s Westend. She joined the Army in WWII as an ambulance driver in France, cleverly evading the Nazis to Switzerland, where she worked for Alan Dulles’ OSS. As a cover, she worked in the music and theatre scene, writing the libretto for Liebermann’s opera “School for Wives”. After her return to England, she worked for Alexander Korda (Christopher Rozycki), met Graham Greene and Carol Reed participating in the production of THE THIRD MAN’. After marrying Colonel Arthur Varley (Martin Wimbush), she returned to Beaulieu.Montagu was clearly was a talented woman who turned her hand to a variety of endeavours and excelled in them due to her confidence and considerable enterprise. An accomplished pianist, she enjoyed a long affair with the professional pianist and teacher Renata Borgatti (Roig de Puig).

Dorothea Myer-Bennett in only her third film appearance, lacks (like Fraser) the experience to portray Montagu; she also lacks her elegance, judging from photos and plays the “rebel” as a middle-aged, rather stuffy woman – uninspiring to say the least. The dialogue is excruciating, lines like “the symphony goes on, but the movement has ended”, when Elizabeth meets an ex-lover after being separated during the war years, are only too typical. Diana Rigg’s voice-over of lines from Montagu’s autobiography are read in the manner of a schoolgirl reciting the catechism. There is also another talking head in the shape of a Montague family member. All these narrative imputs make the production feel fussy and unprofessional. Montague’s is story that has everything going for it: wartime intrigue, romance, espionage and aristocratic cache – with a decent script and great performances Farr could have made this a knockout wartime drama.

Filmed entirely in the UK, scenes set in France and Switzerland lack any authenticity and the action scenes are clumsily executed. DOP Pete Edwards’ visuals flesh out the second-hand nature of this amateur production. THE HONOURABLE REBEL is a missed opportunity: Elizabeth Montagu might not have been as successful as she hoped, but unlike most of the cast and crew of this film, she at least had some guts and style. AS/MT