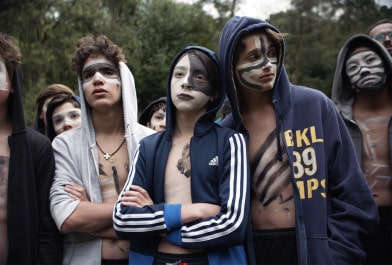 The Hole in the Fence (2021) Venice Film Festival

In a village in Mexico a rigid Catholic institution has long been churning out leading figures for the establishment. But its future is suddenly threatened when the titular ‘hole in the fence’ surrounding the camp is discovered by a group of rowdy teenagers in the nearby Centro Escolar de Los Pinos.

With The Hole in the Fence Mexican directorJoaquin Del Paso (Maquinaria Panamerica) and co-writer Lucy Pawlak have created a summer camp from hell. When the boys arrive in a bus they are immediately warned by staff, under the leadership of ‘Minister’ Professor Monteros (Peralta), that they should stay away from the nearby village. But boys will be boys. A brutal attack on indigenous ‘scholarship’ student Edoardo, by his mostly white roommates, sets the tone for something much more serious as the violence escalates despite ‘meditation classes’.

Another teenager, Diego (Walker), is forced to wear a neck brace and a cast on his arm but the cause of his injuries remains mysterious. The other boys continue to torment Eduardo and when they see him swimming naked with Joaquin (Bustamente) a scuffle breaks out and Josue’s (Cueto) nose is broken. His wealthy parents arrive in a helicopter to collect their son; his father, a former alumnus of the “Centro Escolar” himself, is prevemted from taking action by Monteros. But things get out of hand when the existence of the hole becomes common knowledge, and eventually all hell breaks loose as Monteros’  authority is increasingly challenged. Alarmingly his retribution is as cruel as the boys’ treatment of each other.

Cinematographer Alfonso Herrera Salcedo contrasts azure blue skies with the hell hole unfolding on the ground. He shows evil not as something abstract, but as a combination of psychological predisposition and a generalised cult atmosphere which feeds off the mayhem and the victims themselves. The ensemble acting is brilliant, with Peralta’s Professor Monteros giving a really convincing performance channelling Joseph Goebbels and a Spanish inquisitor. AS