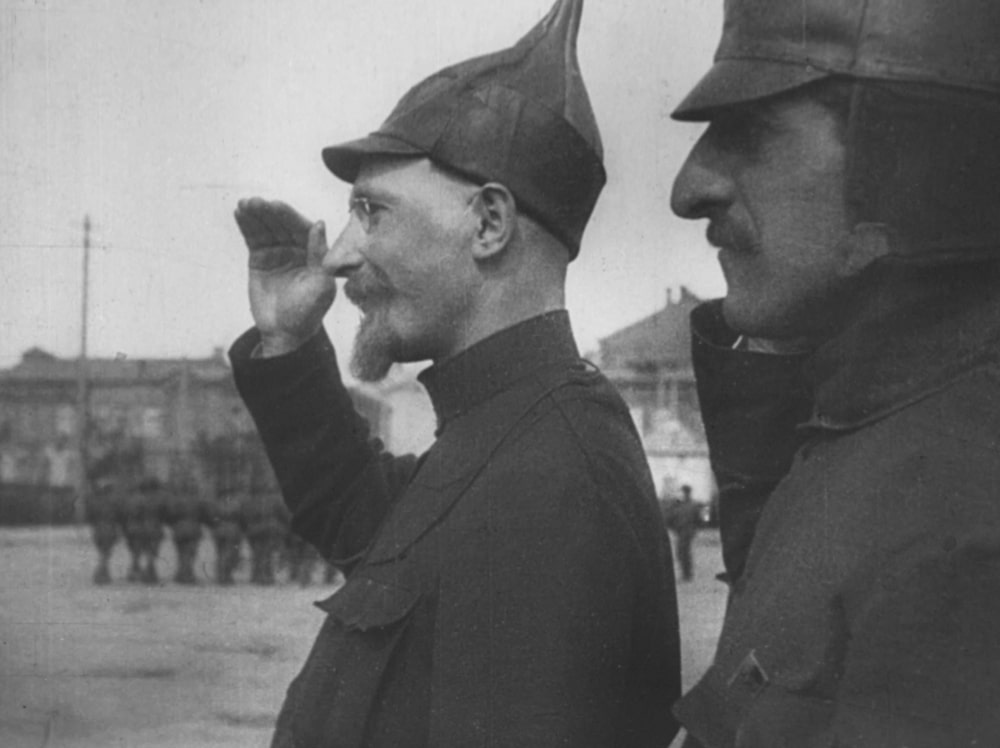 Exactly hundred years after The History of the Civil War was shown in a Komintern meeting in Moscow, Dziga Vertov’s historical document of the Russian Civil War (1918-1921), – believed to have been lost, apart from a twelve-minute footage – screened at IDFA, having been fully restored by Russian film historian Nikolai Izvolov, who also plans to bring back Vertov’s masterpiece Man with a Movie Camera to its original glory.

Dziga Vertov (1896-1954) is the father of modern documentary filmmaking. Using the camera as an observer, and structuring the film in the editing room, he revolutionised the genre, paying as much attention to small details as well as constructing an overview. The History starts with a sequence of devastation: decimated bridges, destroyed railway stations, burning oilfields and exploding munition factories. ‘The White Terror’, enemies of the 1918 Revolution are responsible, they range from anarchists to feudal landowners. Trotsky ends the sequence with the promise that the newly founded Red Army “Will answer the White Terror with the Red Terror of the Revolution.” 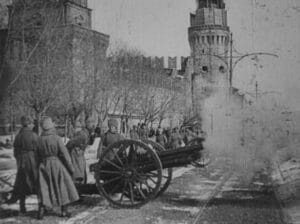 The fight back starts with the disarming of the Anarchists in 1918 Moscow. The captured opponents are (mistakenly) not afraid of their fate. In a garage, machine guns are readied, a cat strolling nonchalantly among the deadly hardware. The HQ of the counter revolutionary forces is to be found in the Spasski monastery. Comrade Nicolai Kazadanov is in charge: he poses narcissistically in front of the camera. Other Soviet military leaders liked to be seen as ‘intellectuals’, their writing desks piled high with books.

Meanwhile, the Soviet Navy deals with their own Kronstadt uprising, among the sailors we see a well dressed woman, looking into the horizon. Comrade Innocenti Kozhevnikov is in charge of a partisan unit crossing the border into Czechoslovakia. Kozhevnikov would be one of the first victims of Stalin’s purges, murdered in 1931. The defeat of Cossack general Miranov is celebrated, and the general is pardoned after the original death sentence. The ‘Makhno’ movement assists the “the young and inexperienced soldiers of the Red Army” to win the battle for Kazan. Political commissar Timofei Mikhailov is pictured in earnest discussions, he would be another of Stalin’s victim in 1928.

We watch a revolutionary Muslim unit and Trotsky greeting a revolutionary Czech unit. The leader of the Soviet Perm front is Grigori Zinovev, shot after a show trial in 1936. The Denikin front is commanded by Yakov Swerdlov, who died “suddenly of TB” in 1919, but had a city named after him by Stalin, the mastermind of this deadly irony. In between the many meetings of military officials at the different fronts, British ‘monster’ tanks are captured by the Red Army, who “would learn soon to operate them”. Meanwhile, at the Baku front Ivar Smilga (executed by Stalin in 1937), and Sergei Ordzhonikidze (driven to suicide by Stalin in same year – but getting a State Funeral), are being honoured for their bravery.

At the Caucasus Front, Sergei Kirov and Konstantin Mekhonoshin are unaware of their fates.  The former will be shot by a jealous husband in 1934, the latter executed 1938. At the front fighting the reactionary Baron Vrangel, Kliment Vorishilov and Red Cavalry founder Semyon Budyonni, are the lucky ones, both will survive Stalin’s massacre of the Old Bolshevik guard. At the very end, Trotsky, general Tukhachevski and Grigory Petrovski, who would sign the treaty of Brest-Litovsk, take the parade of the victorious army. Petrovski, who helped his master with disastrous collectivation experiments, is the the only one who would survive Stalin, with Tukhachevski murdered after a show trial together with seven other old Bolshevik military leaders.

The filmmaker Vertov would never have believed his masterpiece would one day indict Stalin for the murder of these military leaders who fought for the national base, from where he murdered millions. Ironically, Stalin manages to keep a low profile throughout, only appearing briefly in an uncovered scene. Vertov turns out to be one of the lucky survivors – had the documentary survived, Stalin would have taken his revenge on the filmmaker for not hailing him as a war hero.. AS