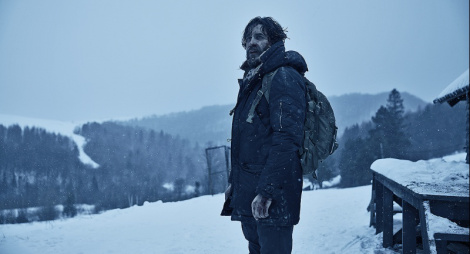 Andrzej Chyra (In the Name 0f) and Marcin Dorocinski (Anthropoid) are the stars of this stylish survival thriller that makes great use of stunning snowbound locations and an atmospheric soundtrack in a trekking holiday that turns into a sinister endurance test for a family of three.

Chyra is Mateusz a former frontier official who is keen to toughen up his teenage boys and teach them the meaning of machismo through heavy drinking bouts and stiff walks through the remote snowscapes and hostile terrain of Poland’s border with Ukraine.

The trip gets off to an inauspicious start when their truck hits a deer on the way to the wood cabin that is to be their remote retreat and the claustrophobic setting for this unsettling nail-biter. Shortly after they arrive the mood turns tense when Janek (Bartosz Bielenia) and Tomek (Kuba Henriksen) open the door to a bloodied and bruised man called Konrad (Marcin Dorociński), who promptly collapses at their feet. Mateusz ventures into the permafrost to look for Konrad’s vehicle and discovers more injured survivors of a serious crash, But while he is gone, the teenagers find themselves having to deal with Konrad who turns out to be a vicious psychopath, despite his life-threatening injuries, and by the end it’s clear that someone is going to die.

Debut director Wojciech Kasperski certainly knows how to generate an unsettling ambience with a sinister soundtrack and DoP Lukasz Zal (IDA) supports the story with his impressive camerawork complimenting the remote locations and edgy standoff between Konrad and the boys. But his script sadly lets him down and leaves the boys robbed of any personality – let alone masculinity – until the final scenes. And with Andrzej Chyra gone for most the running time, the emphasis is on Dorocinski to carry the action forward almost singlehandedly  – apart from a scene featuring Andrzej Grabowski (Lechu) – with Bielenia and Henriksen paling into insignificance as sappy teenagers in rather underwritten roles. It is never made clear why Konrad is free to be travelling with the truck that overturned or why Lechu suddenly turns up at the cabin in its isolated location. The film picks up in the final act where a corruscating finale is the payoff for those who stay the course of this relentlessly gruelling story. MT