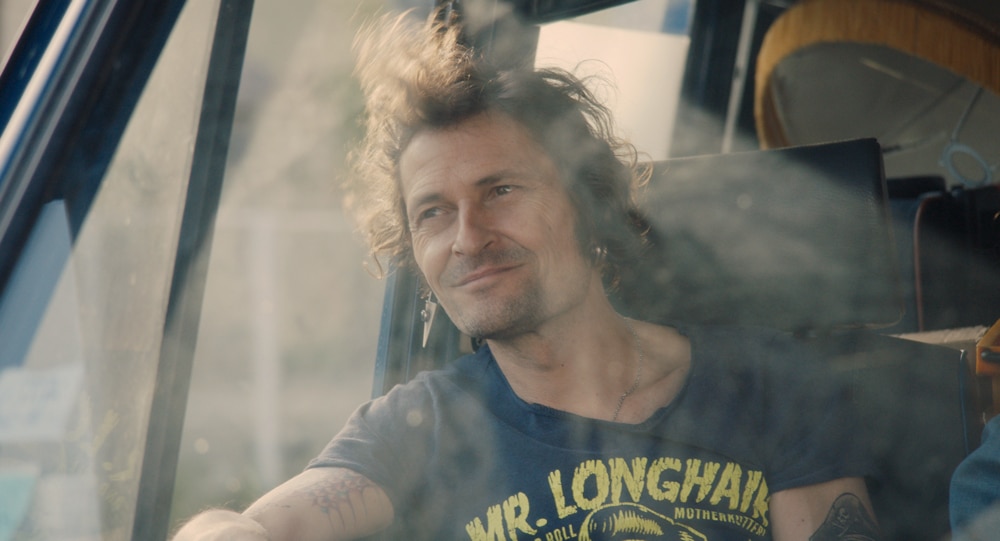 This ‘Men behaving badly in Paris’ buddy movie reunites Maxime Roy with the cast of his short film Beautiful Losers. It’s a world where drugs and alcohol fuel physical and psychological abuse for the punk generation Francois Creton – who co-wrote the script – plays 53-year old bruiser Michel, who has fathered a baby called Arno despite his longterm addiction to Meths, Although he’s spend the last six months on the waggon.

Michel’s meets up with a close coterie of friends at the classic AA meeting, where he breaks down cursing himself and the world in general. But a visit to the hospital doctor confirms the damage wreaked on his body. Although his friends exhort him to ‘grow up’ on a regular basis: he does not want and therein lies the problem. ,

He sees himself as the perpetual Peter Pan character freewheeling through life in an alcoholic daze of music, drugs and his motorcycle. Reality – he feels – has conspired against him. And he’s fallen with nearly everyone, not least Arno’s mother Hélène (Couran) whose advice is: “Do your son a favour, get out of our lives”. Michel’s mother committed suicide and his relationship with his father Claude (Bohringer) – who has anger management issues and is dying of cancer – is even is more fraught, the two men have a big blow up, accusing each other for her death. Despite the bust up, Claude tries to get his son a job as a welder with a friend, but Michel is too proud to go on the training course.

Claude lives with Josiane (Ascaride), who is trying to broker a truce between son and father but even she give up in the end, along with Michel’s oldest son eighteen year-old Leo (R. Creton) who finds out that the fatherly role model is a cul-de-sac, and soon moves out. Michel has a softer side, supporting his AA pal Lily (Ponsot) who can’t face the first hour of alcohol free existence

This this richly textured character piece is no hyper-realist film in the Ken Loach tradition. Nothing could be further from the truth: Roy shows Michel’s depravity in all its glory but opts for a European form of Magic Realism, connected to the South American tradition of Glauber Rocha or Alejandro Jodorowsky.

DoP Balthazar Lab’s fluid camera captures moments of pure poetry: the baby sleeping serenely while a water leak causes mayhem in Michel’s flat.  The motorcycle sequences, shot often at night, are also particularly impressive, when the baby, again, is oblivious to the danger, while his mother is doing her nut. Bohringer and Ascaride triumph along with a talented ensemble cast steered by finely tuned Roy’s finely-tuned direction  in this darkly comic French tragedy that’s competing in this year’s Camera D’Or in the Cannes Special Screening sidebar. AS