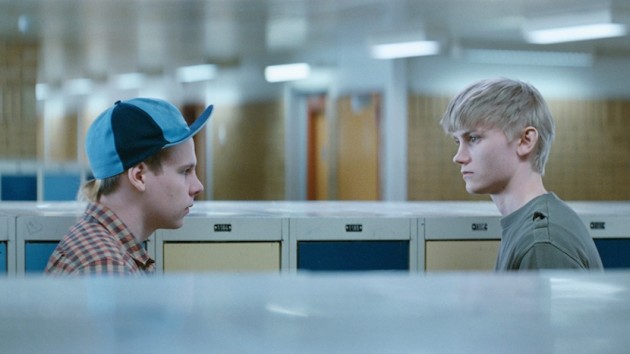 It’s not easy to forget or forgive the past as a young man discovers in Magnus von Horn’s haunting Scandinavian Polish debut THE HERE AFTER.  Lodz graduate von Horn clearly learnt his stuff in the legendary film school. The strength of his psychological drama is that we have no idea what has happened when John (Munther) is picked up by his father Martin (Blomgren) after serving time in a state institution. Clearly John has a violent past and Martin is a control freak. But John also shows signs of infantile regression when he is with his much younger brother Filip (Nordgren) who seems to be emotionally more mature than his older brother. When John goes back to school, we get an inkling of what might have happened: nearly all his mates are extremely hostile to and the teachers have no success in their arbitration. Then half way through the film, after John is attacked by a middle-aged woman in a supermarket, the audience start to get a clearer picture.

Secretly visiting the house of his victim, John meets Malin (Ek), who joined the school when John was away, and does not know much about the case. Surprisingly, John opens up to her: “They say I was like in trance, but I remember everything about it”. John seems to have had a special relationship with his grandfather (Komasa), but the old man is hardly talking any more and shoots the family dog, instead of calling a vet. When some of the boys throw stones through the windows of the John’s family house, he attacks them, and is brutally beaten up. Losing Malin’s trust after arguing with her, he confronts the victim’s mother in her home.

Instead of showing us the well-known world of Swedish conflict solution by talking and understanding, this is an extremely hateful and unforgiving environment, where only the teachers are ready to preach tolerance. The huge majority of students and their parents want John gone from the moment he returns. As for John, rehabilitation is near impossible: he lives alone with his guilt – his father just wanting to prove a point in having his son back at home, without really loving or even understanding him. His little brother Filip is torn between pity and fear that the shadow of guilt may fall on him too.

Malin is curious at first, but when the pressure of her peers gets too strong, she too abandons him as her ambivalent feelings are not strong enough to sustain a relationship under the circumstances. Using a palette of washed out hues, IDA cinematographer Lukasz Zal works his magic on the Swedish countryside that looks and cold and unwelcoming as the environment John finds at home and at school.  The harsh lighting is a metaphor for the malice-ridden narrative. Munther, a pop star, is powerful in his understatement, and frightening when he loses his temper. THE HERE AFTER is a chilling and immersive account of crime and punishment. AS