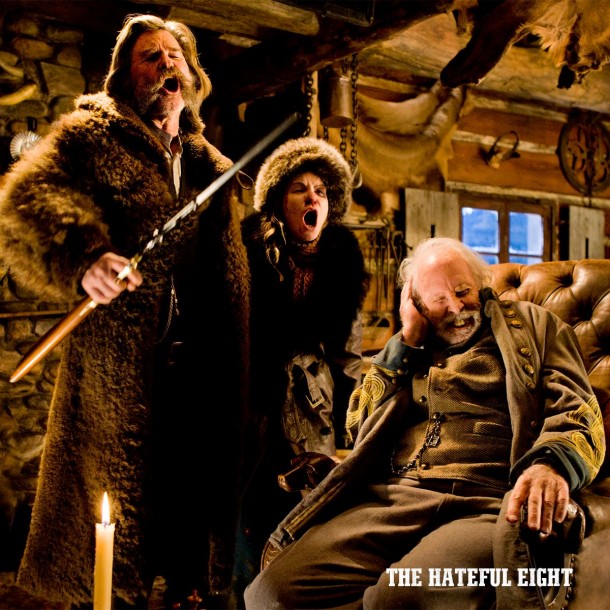 Quentin Tarantino’s HATEFUL EIGHT is ushered in by an ominous overture from Ennio Morricone rendered by the famous Czech National Orchestra and serves to warn us that tragedy is to follow, in more way than one. In the snowy wilds of post-Civil War Wyoming, bounty hunter John Ruth (Kurt Russell) is hand-cuffed to his fugitive Daisy Domergue (Jennifer Jason Leigh), taking her to Red Rock to face her just deserves for murder. From their stagecoach they jossle with a handful of other bounty hunters on the way, including Major Marquis Warren (Samuel L. Jackson). The film is noteworthy largely because it may be the final film to be photographed on archaic 7omm film stock. Ben Hur and other epics used this medium for its panoramic potential but here the width allows Tarantino an estate agent-style perspective of Minnie’s Haberdashery where the chamber piece will unspool its tedious, over-talky 187 minutes’ running time spliced by an intermission.

Tarantino has always championed the underdogs of genre, technique and society and this makes his latest offering a particular let down. A garish, self-indulgent parlour piece so bloated with boring sollioquiys and longuers that it never lives up to what could have been an intriguing and punchy 90 minute whodunnit. Known for his screenplays, the one he delivers here is neither wry nor witty although Tim Roth does his best with a Mr Micawber style turn.

Highlights are the cinematography by Robert Richardson and the snowy wilds are similar to that of an infinitely superior film called The Revenant. But the widescreen wonderland soon narrows down to a claustrophobic closet where our eight hateful characters gradually grind each other down. When the charming cuffed together duo arrive at Minnie’s with the Major and a confederate soldier played by Walton Goggins, they discover another party has already taken up residence at the hostelry cum store in the shape of veteran Confederate general (Bruce Dern); an English hangman (Tim Roth; a raddled, blue-eyed cowboy (Michael Madsen); and a mysterious muchacho named Mexican Bob (Demian Bichir).

While Minnie’s whereabouts occupy the Major’s time, Ruth is mainly concerned with getting his bounty in RedRock and getting shot of his grotesquely-gurning prisoner. The viewer’s primary concern is why Tarantino is wasting the potential of 70mm on this stuffily verbose filmed play.

There’s plenty of woman-bashing and nigger-taunting which accurately reflects an era when misogyny and racialism was rife but at least Mel Brooks made it amusing in Blazing Saddles. Tarantino also does his best to window-dress his drama with a touch of historical background to betoken a cultural underpinning but this HATEFUL is otherwise a trivial caper. Dern is quietly powerful as the daintily vehement veteran. The others deliver performances straight out of the stock Western closet. The tone is crass, caustic and candid. After the intermission, the mass slaughter kicks off in earnest; the initial tension of the steely whodunnit blowing out with the wintry wind. Those out for gore will appreciate this loathsome rivers of blood climax which is delivered with glee and gusto as limbs fly and bodily fluids splatter as our characters monotonously spout forth their bloated bluster while we cease to care who did the dastardly deed. Gradually all is lost as a vomit of filthy teeth, futile posturing and blood-drenched faces fill the screen in this Quality Street without the quality. You’ll be glad when it’s all over and make a mental note to avoid those ‘bottomless’ coffee pots in future. MT

The HATEFUL EIGHT IS ON GENERAL RELEASE.