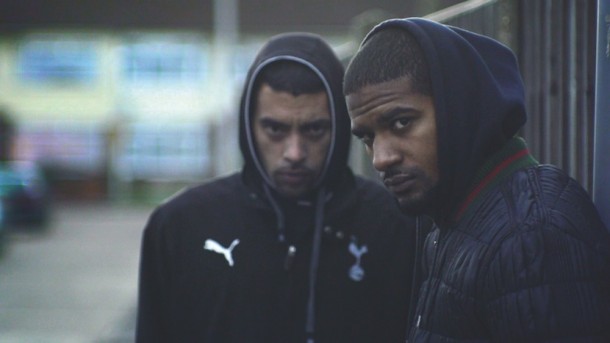 Director/co-writer George Amponsah (The Fighting Spirit) explores the aftermath of the 2011 riots and social unrest sparked by the death of Mark Duggan by following the path of two of Duggan’s best friends, Marcus Knox and Kurtis Hanville.

Amponsah places us right in the cultural milieu of this unsettling era of British social history in a documentary that sometimes crackles with raw emotion in a bid to convey the human aspects of the story from Knox and Hanville’s perspective, while remainingly resolutely dignified in covering three years of their lives from the time of the riots up to the 2014 court hearing that exonerated the police offficer who shot Duggan.

Mark, Marcus and Kurtis were just four years old when PC Blakelock was hacked to death in 1985 at Broadwater Farm, where the trio lived. Rightly or wrongly, these three and many others on the Estate believed that the police were treating them unfairly, wanting revenge. After Mark’s shooting during a “hard stop”, when police vehicles swooped in on his car, the riots erupted in Tottenham and spread, first all over London, than nationwide. By 2009 Marcus and Kurtis have left Broadwater Farm (and their Tottenham Man Dem gang), Marcus is married with two children and has converted to Islam but is still engaged in street activities and is arrested after sparking another street riot by throwing a stone at a spontaneous gathering.

It has to be stated that since 1990, over 1500 people were killed during police raids or in custody – not a single case resulted in a guilty verdict. The police tactics are not always sensitive, and sometimes provocative: there is a widespread ‘us and them’ feeling among the population in deprived areas – with the police often the scapegoat for indolent politicians. But the recent events in Dallas should have shown us that to radicalise the issue is counter-productive: we have to encourage cooperation between ex-offenders like Marcus and the police, to find ways to save ‘street-kids’ from the plight of Mark Duggan.

THE HARD STOP often stridently takes sides but in the end – like Marcus – comes to the conclusion that adjustment to a system, however imperfect, is much preferable to a violent life of gang culture. DOPs Colin Elves and Matthias Pilz’ images convey the frenetic emotional intensity, utter desperation and a permanent propensity to violence – only mediation, enlightenment and adjustment can help to appease the fury of the male ego, whether black or white. AS