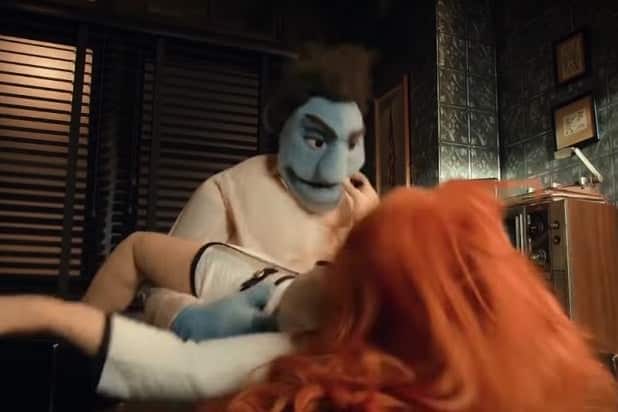 To call Brian Henson’s thriller raunchy would be an understatement. The son of Jim Henson (Sesame Street) has spent forty million dollars to produce an adult-themed Muppet movie. Writer Todd Berger has helped to create a hotchpoth of vulgarity, smuttiness and obscenity, which makes it a serious contender for turkey of the year.

In a rather ugly Los Angeles, puppets and humans make strange bedfellows: Puppets being relegated to second-class citizens. One of them, Private Eye Phil Philips (voice of Bill Barretta) once had a career with the LAPD but now serves the impoverished clientele of his own kind. When sexy Puppet Sandra (voiced by Dorien Davis) comes to his office, he does not know that she is connected to his past. Anyhow, he is kept busy by the murders of the Happy Gang, Puppet members of a 1980s Children Show and are killed one by one. Phil contacts his old flame Jenny (Banks), the only human member of the Show. But Phil is soon on the run, having being present at every murder scene, aided and abetted by his human side-kick Bubbles (Rudolph), Phil re-units with his ex-partner from his LAPD time, detective Connie Edwards (McCarthy) to find the killer. As it turns out, Sandra is the daughter of a Puppet Man, Phil shot by mistake, when he aimed for a man, who held a gun to Connie’s head. But at least Phil could save Connie’s life – though she was given a Puppet liver, which makes her crave permanently for sweets. Connie and Phil team up once more, and have to relive the traumatic scene which ended Phil’s career.

The cliché-ridden narrative and protagonists are just unbearable, but worse is the dialogue: A Puppet tells Connie that “for 50 Cent I would suck your dick”. To which she answers: “It’s a great price, almost makes me wish I had a dick”. And Phil’s lovemaking with the randy Sandra in his office is shown as a demonstration of ‘Silly String’ being used as Puppet projectile ejaculations, giving Bubbles a lot to clean up. This orgy of flying fluff, the innards of the Puppets are strewn everywhere, is, in spite of its professional production values, just for hard core enthusiasts of bad taste. Not surprisingly the film went on to win not one but two awards for worst film and worst actress: Melissa McCarthy  AS