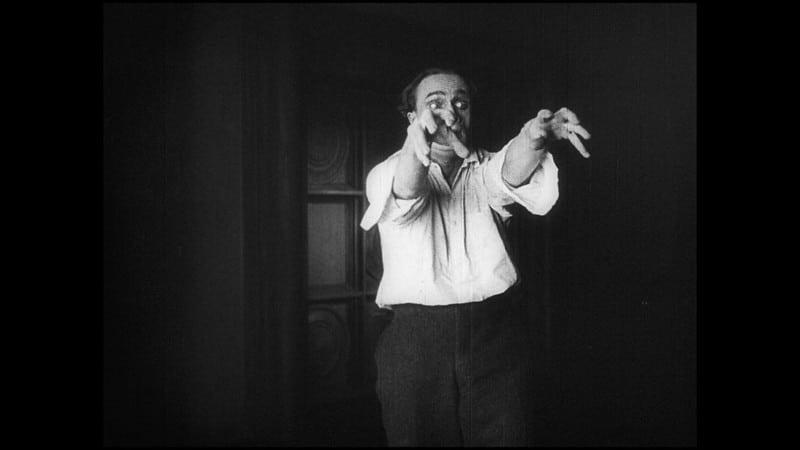 Four years after his most emblematic feature, Das Cabinet des Dr. Caligari, director Robert Wiene (1873-1938) filmed Ludwig Nerz’ adaption of Maurice Renard’s novel as a psychological horror feature blending Grand Guignol with German Expressionism. It starred two of the great stars of the German speaking cinema of the first half of the 20th century, Conrad Veidt and Fritz Kortner; both of whom emigrated to the USA, where Veidt would go on to play Major Strasser in Casablanca. The film would be later be reworked as Mad Love in 1935, directed by emigrant Karl Freund and starring fellow émigré Peter Lorre in his Hollywood debuta. Amongst others, there is also a 1960s version of the original which stars Mel Ferrer, Christopher Lee and Donald Pleasence.

Veidt is mesmerising here as creepy tormented concert pianist Paul Orlac (Veidt) who is gravely injured returning from a concert tour when his train collides with one coming in the other direction. At the nearby sanatorium, Dr. Seral (Homma) saves his life by amputating the pianist’s hands, replacing them with those of a convicted murderer. But it’s not only the criminal’s hands he inherits in the ground-breaking surgery, as we discover in a grim twist in the finale.

Based on a novel by Maurice Renard, Wiene vividly brings to life Orlac’s horrifying descent into madness as his genius suffers and his reputation slowly disintegrates, his career in tatters. He is blackmailed by Nera (Kortner) and his father is mysteriously murdered, Orlac’s fingerprints appearing on the weapon. .

DoPs Günther Krampf and Hans Androschin use light and shadow to deft effects in the cavernous set design, making Orlac much more of a genre horror feature than Caligari. Mad Love was Freund’s last feature as a director, but he would go on shooting 45 features, including Key Largo). Meanwhile, Robert Wiene died in 1938 on the set of Ultimatum while in exile in Paris, the feature – starring Erich von Stroheim and Lila Kedrova (The Tenant) was finished by yet another future Hollywood great, Robert Siodmak. AS

COURTESY OF MASTERS OF CINEMA | MAY 2021