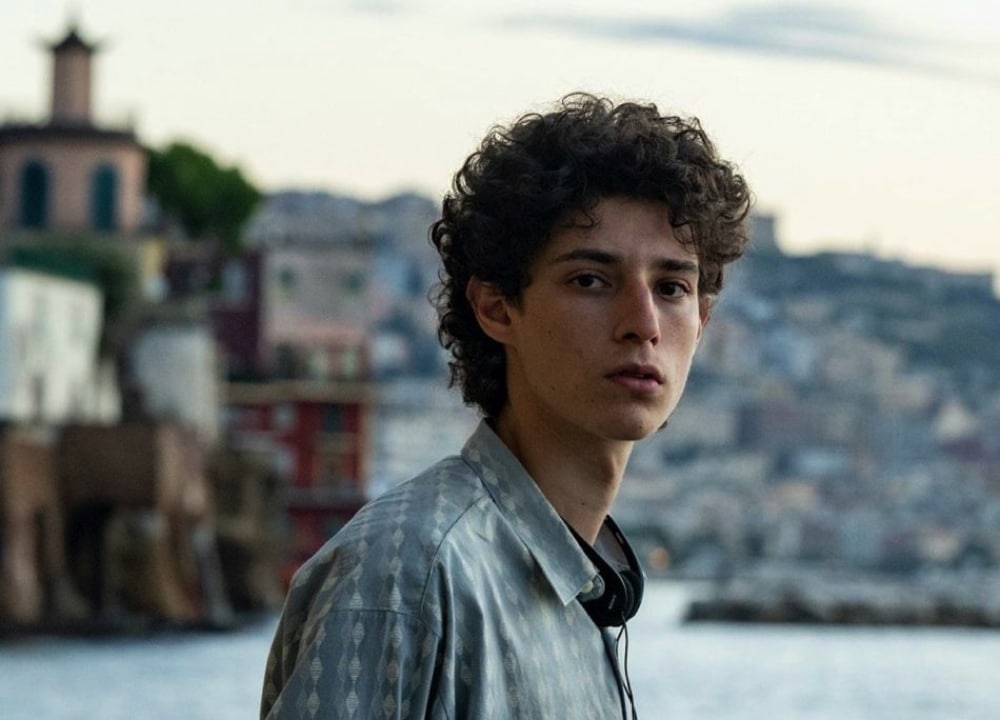 Oscar-winner Paolo Sorrentino returns to Naples in the 1980s with this melodramatic coming of age drama fuelled by football, family and Fellini.

The Hand of God has all the hallmarks of Sorrentino’s signature style: the violent men, corrupt officials and voluptuous women who inhabit a larger than life landscape vibrantly brought to life by Daria D’Antonio’s lush camerawork. But this is a tragedy in the Greek style, complete with folkloric undertones and a soulful often strident chorus-line scoring the mosaic of magnificent vignettes that make up a poignant feature tainted by tragedy, and possibly Sorrentino’s most personal yet.

Naples is the star of the show, the majestic Campania coastline and the mauve mountains of Capri shimmering in the Tyrrhenian sea providing an amazing backdrop to the flamboyant storyline. In the traffic strewn Spaccanoli a big-breasted woman (Ranieri) waits wearily for her bus home. A limousine pulls up and a blue-eyed man (Decaro) claiming to be San Genaro, patron saint of Napoli, offers her a welcome life home and hints at the possibility of a much-wanted child to heal her marriage to Franco (Gallo), who the driver appears to know by name. Astonished, the woman climbs on board, but her arrival home is greeted with a brutal beating from her husband, forcing her to call her happily married sister Maria (Saponangelo) and husband Saverio (Servillo) who soon arrive with their teenage son Fabietto (Scotti) from whose perspective the story continues.

At this point it becomes clear that Fabietto is Sorrentino’s younger self: a gentle, thoughtful, football-mad teenager, desperate to lose his virginity: “just get the first time out of the way” urges his conspiratorial father Severio, a warm and loving pater familias with a fine line in tailoring and a solid job.

But Fabietto’s first love is football, hence the film’s Diego Maradona linked title – referring to a divisive goal he scored in the 1986 World Cup quarterfinal. Welcome news for the lustful but lowkey Fabietto arrives when the Argentine player is signed for Naples and will turn out to be his saving grace in the final denouement.

But until then the film swelters with Neopolitan summer indulgences: robust encounters, raucous al fresco lunches and volatile viragos busting out of bikinis or stripping naked to bask in the sun. There’s a cheeky scene where Fabietto eventually scores, not in the football sense but with his much older neighbour (Pedrazzi). His creativity is stimulated by the charismatic film director Antonio Capuano (Capano) – whose 1998 feature The Dust of Naples, was co-written by Sorrentino.

Sorrentino recalls all this with nostalgia and a tender affection that steers clear of sentimentality in bearing its heart on an elegantly crafted sleeve. Scotti’s Fabietto makes for an appealing, introspective alter ego capable of extreme emotion and utter devotion in fervently pursuing his future career. MT