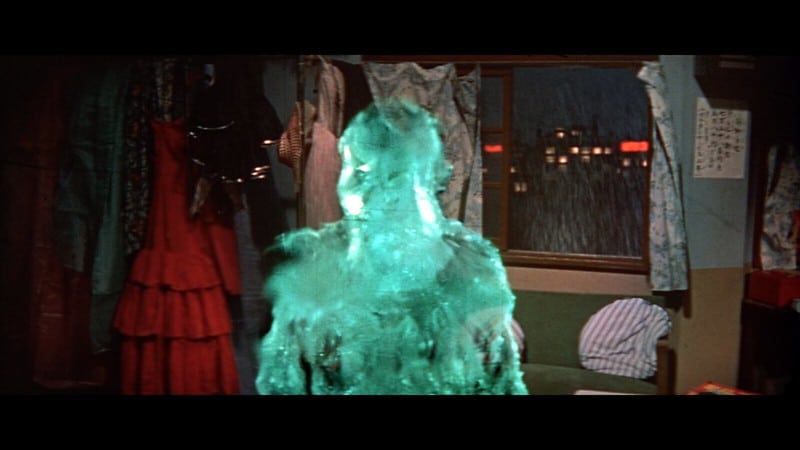 Alan Price remembers the days of X-rated Sci-fi with these three Japanese classics from ISHIRO HONDA, The H-Man (1958), Mothra (1961) and Battle in Outer Space (1959)

Aged thirteen I sneaked, under age, into a Liverpool flea-pit cinema for a double bill of X certificate films. A horror / SF programme kicked off with The H-Man followed by House of Wax starring the charismatic Vincent Price a rising star in the horror film firmament. H-Man was my first viewing of a Japanese film and badly dubbed into English. House of Wax featured effigies melting in a fiery climax. The only thing I remember about The H-Man was an intense screaming followed by a gooey substance running into drains as the rain poured down; this radioactive liquid was being transformed into a glowing green man.

In the cold war years of the 1960s “radiation” was a word constantly on everyones’ lips. To witness a drugs trafficker, exposed to nuclear radiation, and transformed into a poisonous creature, appeared, to my young mind, as dangerously plausible.

Many years later in 2020 I again encountered the 1958 H-Man restored, with all its gooeyness digitised, on Blu Ray. It felt like a re-union of my young fears with an older understanding of things. A force called H-Man never existed but I was still gripped and entertained by a remarkably effective film managing to fuse the crime detective film with an Sci-fi monster movie.

1958 was also the year of The Blob (with the young Steve McQueen). I love the Google description of The Blob – “A misunderstood teen fights to save his town from a gelatinous monster from outer space.” If I had to sum up The H-Man it would be something like ‘an maligned professor tries to convince the Tokyo police force that a criminal has been turned into a radioactive liquid organism.’

Eventually Dr.Masada (Kenji Sahara) manages to convince the police in an apocalyptic climax that takes place in the sewerage system, and the ‘H monster’ is finally destroyed by gasoline poured on water and set on fire. The H-Man gets a hot ending whereas  The Blob’s fate was rather more frigid: it is deposited, by aircraft, in the Arctic wastes. The H-Man actually has more in common with another liquefying monster, that of Val Guest’s 1955 outing The Quatermass Xperiment which sees a former human reduced to an undoubtedly earthbound being rather than a menacing alien from outer space.

The original Japanese title of Honda’s 1958 classic is Bijo to Ekitai Ningen that translates as “Beautiful Woman and Liquid Man.” This gives the film an apt ‘beauty and the beast’ slant as the plot forefronts a beguiling cabaret singer Chikako (Yumi Shirakawa) who was once the girlfriend of the trafficker. She is pursued by her ex-boyfriend (now a slithering organism) along the burning sewers to be rescued by the professor, smitten by her good looks, as he saves her and the rest of mankind from their destiny as an ‘H man’ or ‘H woman’.

There is a great deal to enjoy here: the stunningly shot sewer climax is possibly the most outstanding moment in The H-Man, set on a deserted ship where the crew of a neighbouring ship stumble on the creature. It’s a creepy and potently-lit sequence providing both an incredible/believable back story explores the origins of the green substance: all done with a strong feel for the old ghost-ship tale.

There are no liquid men in Honda’s 1961 Mothra. Yet there is beauty in the form of two petite women discovered on an irradiated island (named Infant Island) in the Pacific. The Beast is Mothra, a giant female moth. Mothra is not out to destroy the whole world but only those who get in her away as she attempts to rescue the kidnapped twins (played by a singing duo called “The Peanuts” whose Mothra song “The Girls of Infant Island” was a pop chart hit).

Radiation sickness also surfaces in this story. Yet instead of a traditional monster movie we have more of an enchanting fairy story. The young women are dispatched to Tokyo to appear on stage in a show called “Secret Fairies Show.” Their exploitation reminded me of the chained Kong gorilla appearing on Broadway in the film Mighty Joe Young. But these girls are too good-natured and innocent to really mind performing, though they yearn to go back home.

One of my favourite aspects of Mothra is the editing between the girls singing and the dancing natives beseeching their god Mothra to break out of its giant egg and help. The caterpillar swims the Pacific Ocean towards Japan: becomes an adult moth (with a most genial face) and flies over Tokyo on its rescue mission.

Beneath its fantasy surface Honda is aware of the script’s political satire which he handles with a lovely light touch. Overall this is an irresistibly charming film. Its special effects still stand up and the mythic and adventure element of its storyline draws upon King Kong, Godzilla (Honda directed many of the Godzilla films) and probably went on to influence Bong Joon-Ho’s 2006 The Host.

Battle in Outer Space is the slightest of these re-issued Honda films. Aliens have based themselves on the Moon. They plan to attack and invade Earth. The UN launches two rocket ships on a reconnaissance mission. The battle commences. Finally the alien’s mothership is destroyed and Earth is saved.

The two most remarkable aspects of Battle in Outer Space are its comic book model work, no strings and all smoothly executed, plus a very early sixties optimistic belief in international co-operation: nationalism recedes in the face of universal goodwill to save the planet. How far away are we now from benign diplomacy and world peace in our strongly divided Earth of 2020!

If you search on YouTube I think you will find these Honda films. But they will be the cut, un-restored American versions. Forget them and go for the complete Japanese language originals on Eureka. They look and sound great. Light and dark fantasies from another differently inventive age of popular Japanese culture. ALAN PRICE.