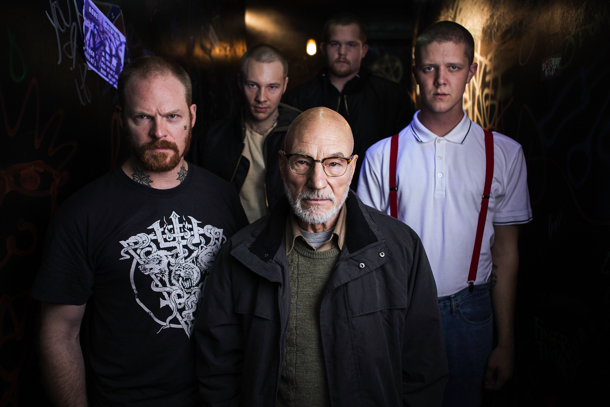 Saulnier emerged on the indie scene at Cannes 2013 with his richly-textured arthouse revenge thriller Blue Ruin. But this latest outing GREEN ROOM feels like he’s slid back into the teenage slasher territory of his debut Murder Party. Whilst being reasonably entertaining, this tale of a punk band who wander into the dangerous clutches of a gang of fascist drug dealers, feels slacker and less convincing with its throwaway gory violence and puerile stab at black humour that will go down well at Frightfest.

Another reason why GREEN ROOM feels less edgy and unsettling is the casting of mainstream actors, Imogen Poots and Patrick Stewart. Although this talent may be more of a box office draw, the result is a film that feels more anodyne despite some macabre moments. For a start Imogen Poots will always impart a Sloaney feel for British audiences and Patrick Stewart pales into insignificance compared with Ben Kingsley, in ‘gangleader mode’. The extreme schlocky violence is another reason GREEN ROOM fails to impress, causing many more eyes to roll, than heads and limbs. The continual meaningless re-makes of Texas Chainsaw Massacre have shown why ubiquitous hacked-off limbs and geysers of blood simply aren’t scary or horrific. Less is always more, where blood and gore are concerned.

The story follows a punk band that have just been on tour throughout the US and haven’t really been coining it. Petty arguments have broken out between band members – bassist Pat (Anton Yelchin) and drummer Reece (Joe Cole); so guitarist Sam (Alia Shawkat) and lead singer Tiger (Callum Turner) are the only ones still speaking when they fetch up at a roadhouse in Oregon. This is extreme right fascist skinhead territory, apparently. After a pretty miserable go on stage, one of the ‘Ain’t Rights’ returns to the Green Room to discover a murder scene. One of the skinhead girls has been stabbed in the head and her friend Amber (Imogen Poots) is frightened to move. In the end, they barricade themselves into the Green Room while venue manager, Macon Blair (Blue Ruin), and the venue’s owner Darcy (Stewart) hang around outside with murderous intent.

There’s nothing inventive thereafter as, gradually, the band members meet their grisly deaths in ways that will unfold for those interested in seeing the film, which, to its credit, is laced with a lacerating black comedy. Dogs are involved but, for once, don’t seem to be involved in the death count. Disappointing and predictable then as an edgy horror outing, but entertaining if outright slasher movies are your bag. MT