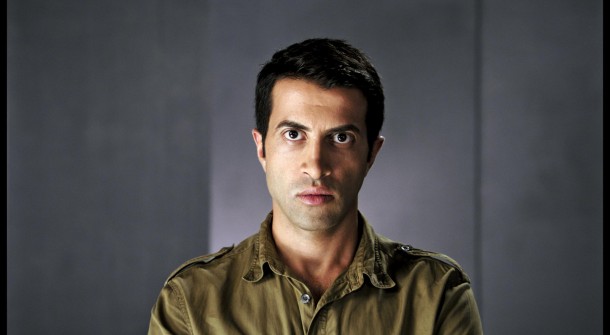 Nadav Schirman, has already proved that he can fuse personal and political into a traumatic expose of tortured souls with his portrait of the wife and daughter of Carlos the Jackal: In the Dark Room”. In THE GREEN PRINCE, he has outdone himself with a story of Mosab Hassan Yousef, son of the “Hamas” founder and co-leader Sheik Hassan Yousef, who turned against his father’s organisation to become a spy for the Israeli security agency Shin Bet.

Whilst they gave him the glamorous code name ‘Green Prince’, his life becomes a hell of torn allegiances, a schizoid existence. For Mosab, born in 1978 in Palestinian Ramallah, Hamas was much more than an organisation: “it was a family business”, since the Israelis imprisoned his father for many years, leaving Mosab, the oldest of five children, to look after his siblings. It therefore came as no surprise that 17 year-old Yousef was arrested and imprisoned by the Israeli security forces himself, for smuggling weapons. In jail, he witnessed the brutal regime of Hamas, when suspected traitors were tortured by having plastic burned on their skins. It made him re-asses his loyalties to the political goals of his father, but not to the man: he became a Shin Bet agent, trying to stop the suicide bombings of Hamas, as well as keeping his father alive. Finally, he decided that an Israeli jail was the safest place for the Sheik, since the Israelis were killing Hamas operatives, on suspicion of terrorism. For ten years Mosab’s life was literally in the hands of his Shin Bet counterpart Gonen Ben IItzak, his ”handler”. The two men forged a fragile relationship, which became stronger, until after Mosab’s burnout and flight to the USA, when their relationship became much more personal.

Schirman interviews both men in medium/close up shots, concentrating on their body language. But their reflections are always underpinned by archive footage, surveillance footage and reconstructions of their various meetings. THE GREEN PRINCE is a rarity in its fly-on-the-wall ‘Spy-like’ approach of allowing the audience to follow the two men. In this way, we witness the brutality of the fighting from both sides: there are obviously rights and wrongs on both sides off the fence, but the only coherent conclusion is that the fighting and slaughter must stop. Palestinian is occupied by Israel, but a Hamas regime would be even more violent than the occupation.

It is a miracle that Mosab has survived the last ten years, permanently living in two worlds: the spy who saved his family, knowing very well that he is now seen by them as a traitor. This young man has lived his entire life with the daily threat of death, practically living in hiding with the knowledge that any chance meeting could give him away: Mosab Hassan Yousef has paid a high price for his conscience. THE GREEN PRINCE is his story: the son torn between two fathers. AS

ON GENERAL RELEASE FROM 12 DECEMBER 2014