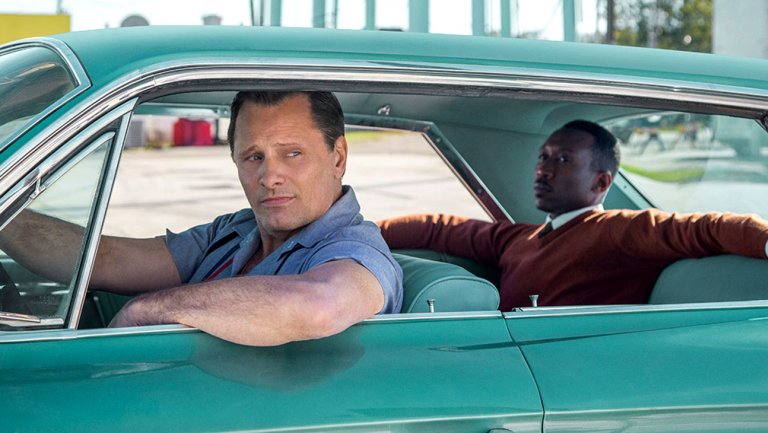 Green Book is the latest in crop of racially aware films and certainly one of the most moving and enjoyable. It sees the suave classical musician and a bulky Bronx bouncer continually at odds in a stylish road movie that travels to greater understanding in the US Deep South of the Sixties. Paradoxically, the bouncer is white, the pianist black. But it doesn’t end there. There is also a delicately handled homophobic issue at play. The movie is given extra mileage and a hint of humour by a distinctive duo of Viggo Mortensen and Ali Mahershala.

The title refers to Victor Hugo Green’s The Negro Motorist Green Book, which was published annually from 1936-1966 to advise black travellers where they could safely graze and stay during the dangerous days of Jim Crow and the sundown laws. Nick Vallelonga bases his script on a real friendship that arose during a tour made by the regal musician Don Shirley (Ali) and his driver who remained close until their deaths in 2013. Being classically trained, the Jamaican-born Shirley could turn his hand to tinkling the ivories in any musical style from classic to impro music, and prides himself on his aristocratic background and fluency in several languages. But his Southern tour needs the protection of a white man and Viggo Mortensen’s straight-talking family geezer Tony Villalonga fits the bill.

In his latest drama Peter Farelly isn’t afraid to experiment or go to the dark side of racialism but also knows when to pull back. Sean Porter’s luminous cinematography really sets the night on fire with his glowing glimpses of New York, Alabama and Louisiana as the two motor south in their turquoise Cadillac.

Character-wise this is a knockout: Viggo Mortensen really inhabits the short-fused Italian who is never without a cigarette or a meal in his mouth. In contrast Mahershala exudes style and panache as the prim but troubled troubadour who lives in a penthouse above Carnegie Hall, decorated with his personal throne and elephant tusks.

Musical references are plenty and Shirley “plays like Liberace but better.” and these musical sequences from Chopin to Jazz are so convincing we’re left wondering whether playing the paino is another of this Mahershala’s many talents. MT