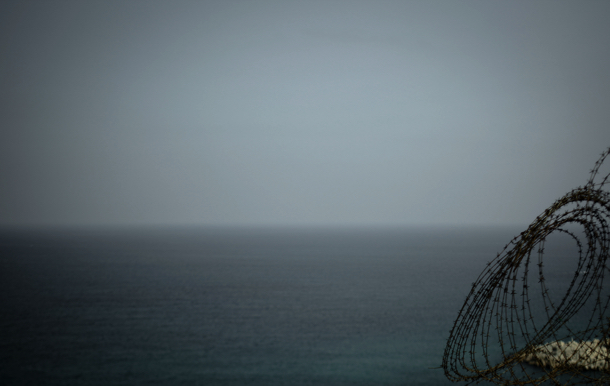 Very much an essay film, THE GREAT WALL is the second feature documentary of Tadhg O’Sullivan (Yximalloo), is a lament on boarders and divisions featuring a (part) reading of Franz Kafka’s short story ‘The Great Wall of China” in its original German, the latter underscoring the conceptual character of the work.

The Great Wall is also a baffling experience, in a positive way, it feels a little like the first Chris Marker films: somehow the different levels seem to not compliment each other totally, but encourage the audience to de-code them. It is perhaps helpful to quote O’Sullivan himself who explains his intentions and his conceptual approach which did not start with the short story, “architecture can be a tool for articulating power. I used Kafka as a prism, as a lens, to look at the subject.” The result is sometimes comes over as a film shot by Aliens on a visit to this planet, who trying to figure out what is going on. The enigmatic nature of The Great Wall is its main strength, like a good poem, it would gain from a second revisit.

Starting with a Kafka quote: “A Cage went in search of a Bird”, the Czech’s writer’s story about the rather unorganised building of the Great Wall, and its reflections on power structures, features overpowering images of borders starting with the only land boarder between Africa and Europe, the old Spanish enclave of Melilla where a three meter high wall with barbed fence is supposed to keep Africans out; even though we see so-called fence jumpers trying to gain illegal access to the continent. During the narration a score of Electronic music often drowns out our thoughts subliminally reminding us of the purpose of the Chinese Wall: to keep the Southern ‘savages’ out, whose frightening images are shown to children, when they misbehave.

Then the film translocates to Athens where police and demonstrators clash violently, before huge office blocks in the cities of London and Brussels dwarf all humans, reducing them to swarming ants. Bach lightens the tone, but soon we are back with the Electronic onslaught and images of boarder installations, frightening and at the same time alien. Kafka’s short story tells us not to question the authorities; their imperfect wall is a reflection on themselves.AS