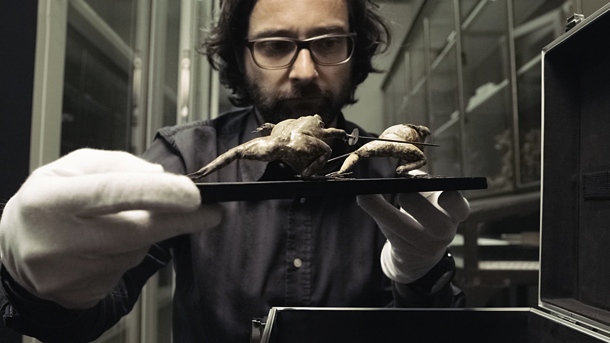 Panning over the majestic Viennese capital, Johannes Holzhausen’s well-paced and elegantly cinematic doc is as ambitious and proud as its premise: to share with the World the exquisite beauty of this house of treasures and priceless artefacts all of which can be enjoyed for the princely sum of 29 euros a year. (in contrast The Royal Academy’s annual sub is £48). This presents great value for a museum that houses not only Austrian art but also some of the Austro Hungarian Empire’s most valuable artistic heritage.

Recently subject to an extensive refurbishment, the film opens with the svelte figure of director general, Sabine Haag, strutting her stuff through the gallery (sporting a very recherché animal-printed corsage) in conversation with one of the planners. Later we see her explaining how the re-branding of the museum will create funding to allow it to compete on an International scale with similar cultural institutions. At an internal meeting, we also discover that the museum is flourishing with annual turnover of €38 million (by comparison The Royal Academy grossed £36.3m). Panning through the magnificent showrooms, the camera showcases the grand proportions of the buildings as well as its pristine and expertly designed archive facilities. White-gloved employees work tirelessly on the intricate job of curating the many treasures: amongst other priceless items the museum houses Emperor Franz Joseph’s sword and his uniform pre 1916. The documentary is very much in the style of Armstrong and Miller’s comedy vignette of St Francis Assisi “Fioretti” and makes a excellent companion piece to Frederick Wiseman’s documentary National Gallery (2014) and also Jem Cohen’s Museum Hours (2012). MT

OUT ON GENERAL RELEASE FROM 9 FEBRUARY 2015