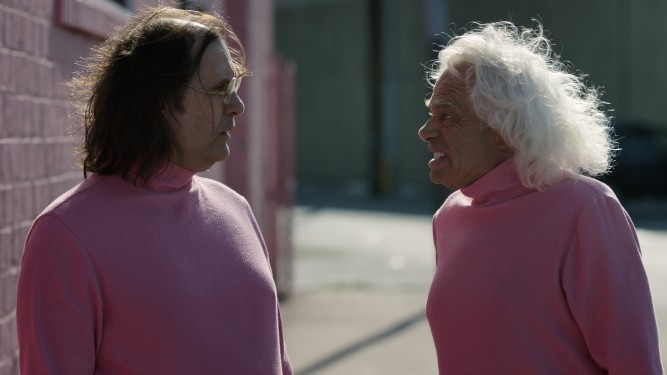 Jim Hosking’s debut feature can best be described as repulsive; at worst – a simply awful con intended to perplex and intrigue audiences with its ambiguous title, the fantasy is none other than a repetitive series of vile visuals exploring the relationship between a dysfunctional father and co-dependent son who inhabit the seedy backwaters of Los Angeles. These grotesquely sordid scenes exist merely to flesh out a vapid narrative that serves no other purpose other than providing a salacious talking point between critic and cineaste, some of whom postulate that the feature may appeal to kids – which is frankly insulting, as most kids have a modicum of taste and know when they are being taken for a ride.

The plot is simply thus: Big Ronnie (St Michaels) and his son Big Brayden (Elobar) are forced into romantic competition over Janet (De Razzo) a pleasant participant in one of their bizarre walking tours while the murderous activities of the soi-disant serial killer the Greasy Strangler, play out in the hinterland.

Visually and technically The Greasy Strangler is well-crafted with Marten Tedin’s camerawork capturing the low-life lassitude of nighttime Los Angeles. Performances are lacklustre in an outing that transcends even the cult status of being camp or kitsch. Endless stomach-lurching bodily functions are frequently thrust into our gaze – if The Greasy Strangler were an exhibit it would smell like a fetid cesspit in downtown Dakar – that said – if you get your kicks from fetid cesspits in Dakar – this is your flick – and no offence to Dakar which has a delightfully dry year-round climate and some wonderful street markets. Catch the boat to the nearby island paradise of Gorée for its fascinating history and idyllic beaches!. MT