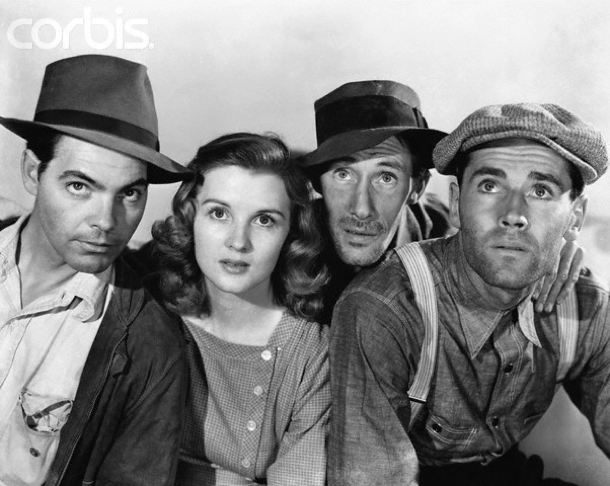 John Ford’s THE GRAPES OF WRATH (1940) achieved iconic status by being one of the first films to be selected for preservation in the United States National Film Registry. Does this film, now 75 years old, deserve that accolade? Yes, it certainly does says Alan Price.

THE GRAPES OF WRATH is not a revered ‘museum piece’ but a living and visceral classic of social realism whose concerns about poverty, displacement and exploitation still strikes a chord and 1930’s Depression America continually haunts us today.

The film records the journey of the Joad family. They’ve suffered the trauma of the dustbowl on their farm in Oklahoma and their home has been seized by the bank and they are forced to load up their possessions on a truck and head West where California appears to be offering fruit picking work. On the road they encounter hardships, scorn, resistance and the death of their grandparents, accompanied by small acts of kindness from ordinary folk.

Accompanying them is their paroled son Tom (Henry Fonda). Tom is the one who will eventually answer back to a repressive authority and become the film’s social conscience. Whilst the mother, Jane Darwell, stoically epitomises the spirit of the family and the people, Ford movingly employs their voices as a ‘rhetorical’ commentator as they journey to the humble ‘Eden’ of a decent better paid job and stable home. Some have viewed this as socialist propaganda. What saves their words from being sentimental or preachy is the heartfelt sincerity of the performances. Ford coaxes such magnificent acting out of Darwell and Fonda. Ford, who was often a right-wing sympathiser, ended up making a film sharply critical of American capitalism, which, at the time, was a very daring move.

Despite Ma Joad’s famous affirmation (“We are the people. And you can’t beat the people. We just keep on a’goin”) the film remains unsettled and rootless. For THE GRAPES OF WRATH now appears as an unlikely pre-curser of the contemporary road movie, emerging out of a family drama, causing traditional roles to be reversed on the highway and creating hard consequences. Film critic Andrew Sarris once said ”What is actually happening is nothing less than the transformation of the Joad family from a patriarchy rooted in the earth to a matriarchy uprooted on the road.”

Ford’s authorative direction and his assured placement of camera – from Ma Joad’s expression, in a mirror, as she tries on old earrings just before leaving home – to Ford’s truck-view tracking shots upon entering a work-camp; Gregg Toland’s photography (just prior to him working on Citizen Kane) contains so many expressive night shots whose poetic eloquence never draws attention to itself. All these elements coalesce seamlessly in THE GRAPES OF WRATH. Consider also the early candle lit scenes with a displaced neighbour: They evoke a nightmarish scenario where home has been destroyed and dignity and sanity unsettled.

Nunnally Johnson’s script is an exemplary adaptation of Steinbeck’s novel. Whilst the courage of Daryl F.Zanuck to have produced such a film is quite remarkable. Essential viewing. AP