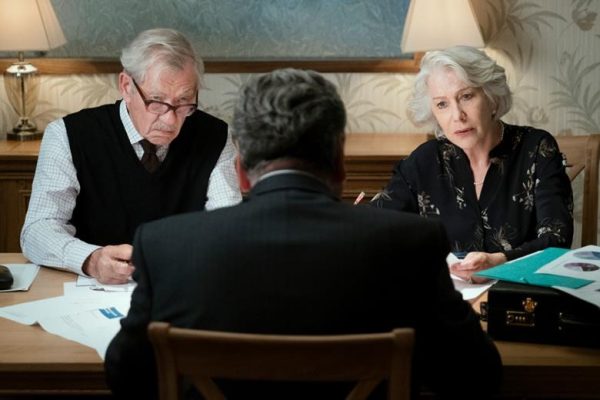 Helen Mirren and Ian McKellen clearly had fun filming this over-baked conman melodrama with its ludicrous twists and turns. It’s enjoyable. But you can’t take it seriously.

They first meet on the internet. A couple of old timers back in the dating game again, the usual platitudes aired in a swanky restaurant on their first meeting: “You look better than your photo” that kind of thing. Ian McKellen is rain-jacketed old roue Roy. Mirren, a well-preserved grand dame called Betty (hardly!) with a penchant for pussy bows – or that’s what we’re led to believe. You see how it’s all shaping up once Roy gets to grips with Betty’s financial credentials. And wonder how soon he’ll get his paws on her loot. Mirren and McKellen are mildly entertaining – but that’s not enough to justify a running time of nearly two hours.

Adapting Nicholas Searle’s novel, Condon and screenwriter Jeffrey Hatcher get to work on establishing Roy’s modus operandi when ripping off rich clients, with his financial partners. He’s clearly schmoozing Betty along the same lines but with romantic overtures – and a gammy leg – in the hope of appearing a charming old geezer just looking for love. Betty appears to be falling for Roy but she’s no fool. And neither is he, despite their genteel appearances.

The fly in the ointment is Betty’s doting grandson Stephen (Russell Tovey), a specialist in German history who develops an amusing animosity towards the crafty old gent. Especially when Betty offers Roy the spare bedroom after seeing him max out on his limping routine.

The two then embark on a misjudged mini-break to Berlin, on one of Betty’s dodgy dividends. And here the story gains another string to its bow, and a pretty contrived one at that. So much so that it beggars belief when Condon weaves a wartime plot line into the mix leading to an unfeasible finale. For the whole thing to work, Condon should have made a more sinister, hard-nosed drama rather than this archly curious comedy. As Roy so cleverly points out, “this feels like drowning in beige” MT