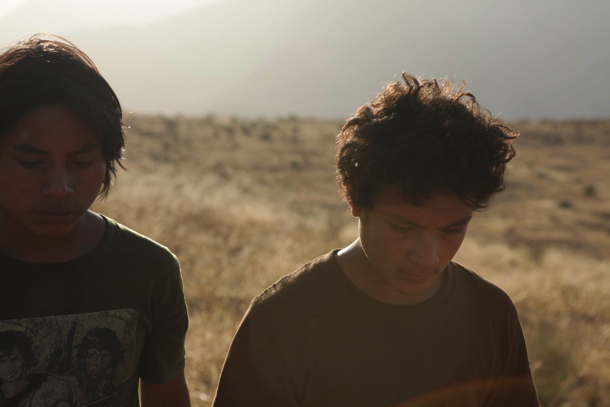 The Golden Dream (La Jaula de Oro) follows three young Guatemalan immigrants on their journey through Mexico to the US border. Juan is a macho, urban boy who believes in the American Dream, the more grounded and spiritual Chauk is a Tzotzil Indian who doesn’t speak Spanish. Acting as a conduit between the two is the pragmatic Sara, who opens the film in front of a mirror, cutting off her hair and taping down her chest to become “Osvaldo.”

Born in Spain Diego Quemada-Diez emigrated to the US twelve years ago. There he studied at the American Film Institute in California and started out in the film business as a clapper boy on Ken Loach’s Carla’s Song. He went on to become Camera Operator under DOP, Chis Menges for two further Loach movies and then directed two documentaries in Mexico before making The Golden Dream, his debut feature film. 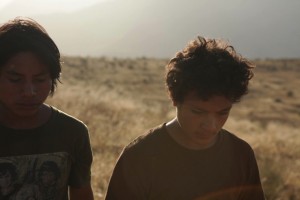 Tom Dewe Mathews: What drew you to the subject of migration?

Diego Quemada-Diez: I was doing a documentary back in 2002 about the red-light district in Mazatlan near the [US] border when I met a taxi driver who invited me to stay with his family. I ended up staying there for two months. The house was just beside railroad tracks and every single day a train would arrive filled with immigrants. When they hopped off and climbed down from the roofs we would give them food and water. That’s when I started talking to them. They told us these terrible stories, how they were travelling with nothing because they had been robbed on the way. I spent several years collecting their stories – that’s probably why the film took so long to finish. I felt they were heroes, they were risking their lives to try and help their families escape from poverty.
TDM: Immigration is a hot topic of debate, both in the UK and America at the moment.
DQD: Yes, and that’s why after talking to about five hundred of them  – a lot of them were children and teenagers, I thought, I must tell their story, and tell it as a homage to them, to show their journey from their point of view, so that someone, say from England or France, could understand why people are migrating and feel that they would do the same thing in a similar situation.

TDM: How did you go about trying to achieve that?
DQD: It’s strange but I decided to make an epic poem, an ode if you like to migrants, to young kids that are trying to find a better life. 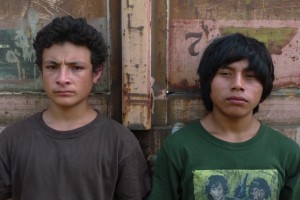 TDM: Did you have a story-telling structure in mind?
DQD: Yeah, there is the outer journey of the characters with their migration but there is also the inner journey of the lead character, Juan which involves an extreme dramatic arc. He learns a lot, his armour falls away, he realises that individualism is an illusion, a lie told by society, and that alone we can do nothing. So at the end when he arrives in America, when his destiny falls apart, just as it does for Ulysses in the Odyssey, he becomes more aware, more conscious. Now he knows that he has to begin another journey but this time going inside his mind rather than outside of himself, and that the journey is what’s important, the path. For me he is reborn with that discovery.
There is also a structure of contrasts in the characters. In their opposing worlds Juan represents the rational, the mind, and Chauk, the heart, the feeling. But during the journey Juan learns to feel, to express himself emotionally. This is why when I filmed I had the Tzotzil greeting in mind, “K’uxi élan avo’onton?” [How is your heart?] 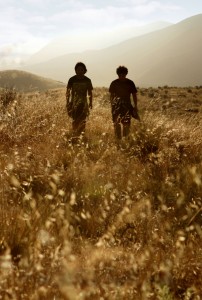 TDM: You also use poetic images, visual metaphors.
DQD: I’m not interested in filmed theatre or expressing ideas through a literal monologue. I tried to articulate my ideas through a contrast of characters, in this case a boy who believes in the western model and a indigenous Indian. My intention was to learn the craft through the camera, to tell the story with images and also through the clash of cultures, the clash of languages, of races so as to provoke a transformation in the lead character.

TDM: You are not gentle with your characters. Throughout the film you never know what’s going to happen to them.
DQD: That’s the way life is in my experience. It’s boom, it’s sudden. When I talked to the immigrants, they said that they had to just keep going. Anybody around you who suddenly dies or disappears, you just go on. This shit happens, that is their way of life.

TDM: In the film you use visual metaphors as a means of contrast, between the poetic and the concrete, for example, or physically in the way you contrast America and Mexico.
DQD: I wanted to question this idea of material progress. The train is what brings people and raw materials to the factories, they bring the migrants, the cheap manual labour that the United States needs to keep the wheels of its industry moving. At this stage listening to the testimonies of the immigrants the tremendous hypocrisy of the US really hit me. I heard about families divided, babies ripped away from their mothers, children who are beaten in the deportation centres, adults manacled by their hands and feet – just like slaves, thousands of people in prisons whose only crime is to cross an absurd border.
So I wanted the United States to be the ugliest place – concrete, freeways, no trees, no nature and to show Mexico as this beautiful landscape. So you would get there at the endnand say to yourself, “Why did they go there? Why didn’t they see all that beauty?”

TDM: About the beauty: why did you include those sequences of birds in flight and the falling snow? They almost seem like fantasy scenes.
DQD: I had to work with fences, barriers, frontiers but I also wanted the flight of birds. So it’s there but not there, not too underlined. I gave Juan the scenes of falling snow to suggest a more poetic way of looking at life as opposed to the materialistic way. Also I discovered that there is a rhythm in film if you have an image that repeats itself. If you have that image and then juxtapose it with a repeated sound you throw the audience into a different place. 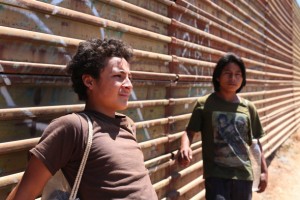 TDM: In other ways, though, this is a classic suspense film. Will our heroes attain their goal? Will they reach America?
DQD: I had a teacher in screenwriting at the American Film Institute in Los Angeles. He wrote The Magnificent Seven [William Roberts] and he always talked about classical structure: the journey of the hero, conflict, the antagonist and so on. I thought, “Fuck, what are you talking about? You’re so conventional.” Then I said to myself, “You’re so arrogant Diego. Of course he’s right. Of course I want my first film to be a classical film.” Because, if you look at Bergman’s early films, for instance, as far as storytelling goes, they are totally classical. Then he could go on to make Persona. So I was very clear. I would tell a story in a classical way but, on the other hand, not be conventional about it, because the key thing, the hardest thing I think in film is to know how much information to give to the audience. It’s a fine line. If you give them too much they’re ahead of the action and not interested anymore. So I decided to lean towards not giving too much away, not too much exposition, and leave gaps so that the audience has room for their imagination.

TDM: Within that convention you also have hero who has to go on a journey.
DQD: Yes, when I was writing, it was helpful to say to myself,  “Yes, there’s a hero who wants something and there’s obstacles on his journey. And this antagonist or these obstacles will take on different shapes: sometimes it’s the cops, sometimes it’s drug dealers, sometimes it’s the kidnappers. And, of course, the force of that conflict between them and their antagonistsngoes up and up and up.
The other thing that I like about classical filmmaking is that the author is not very important. You have to have a point of view, you have to express something, otherwise why make a film? But you have to be intelligent, you have to be subtle about how you achieve your particular ideas. In that sense I wanted the characters and the narrative and the characters to stand up on their own. It isn’t about me saying, these are all the tricks I can do.

TDM: Did your work with Ken Loach help you in that way, in the way that you project ideas into a film?
DQM: The most important influence that I got from Ken was that, if you want to articulate a political point of view, if you want to say something about a certain subject you have to embrace that world. He taught me that films can stand for something, that they can be entertaining but they can also have a social function. In my case I wanted to build bridges, to dissolve barriers, frontiers.
But you also work from your feelings. When I listened to the migrants, afterwords, I cried a lot and I hoped to take that feeling into the film. You work from that truth and you try to inject as many truths as possible into a film.

TDM: How did you project that feeling once you began filming?
DQD: From the locations, from the actors but there is also a method behind this. We shot in chronological order and the actors didn’t know the script. Every day before we began I would read the scene and say, “Okay, this dialogue I wrote here how would you say it?” and then I would change the lines. That way they could live out what was happening around them.
Ken told me the best direction is indirect direction. You don’t tell the actor, “Do this.” You suggest something that provokes their behaviour but which also allows them to be themselves. So you guide them along and then document what’s going on, like a witness. After awhile I noticed the camera became invisible to them. 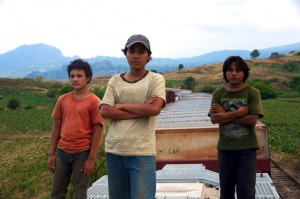 TDM: This search for authenticity did it also affect the way that you filmed and framed scenes?
DQD: I think that the audience should literally have a human point of view so I put the camera at the height of the eyes. I never put the camera where there wouldn’t be a human being, never on a crane, on a dolly or on a track.

TDM: You presumably wanted the audience to identify with the characters.
DQD: Yeah, you create this illusion, the viewer is there, they’re another character, they’re on the journey with them, they have the same experience. Because film is a voyeuristic. But I also wanted to make a film that has something to do with life, with contemporary reality. I want it to have a positive impact. This a utopian aspect that Ken works on and that I try to work from. You hope to transform the viewers’ awareness, their sense of change, of rebellion and show that you can look at things differently.

TOM DEWE MATHEWS is a film journalist who writes for the Guardian and Time Out. His book, Censored, explores the absurdities of censorship over the whole history of film in Britain and is available through Random House .