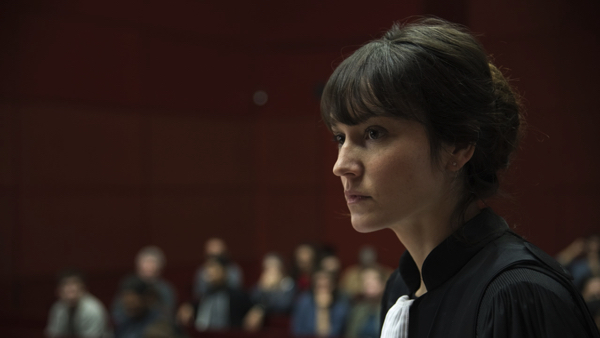 
Wilful nonchalance comes across as evil in this sophisticated social thriller from Stephane Demoustier based on the script of Acusada by G. Tobal and U. Porra Guardiola and set in the Britanny town of Nantes.

Thee chilling story of modern teenagehood plays out in the stylish family home of Lise Bataille (Guers) – accused of murdering her best friend Flora Dufour – and in courtroom scenes where an intense battle plays out during the murder trial. This is probing stuff and you really have to concentrate hard on the subtitles if you don’t speak fluent French.

16 year old Lisa lives with her parents (Chiara Mastroianni and Roschdy Zem) and has been forced to wear an electronic ankle monitor after the fateful night she spent at Flora’s house. Flora was found savagely stabbed to death around midday the following morning. Lise is the main suspect and the only genetic print on Flora’s body has been traced back her. It also emerges through Lise’s frank confession, that the two purportedly slept together naked in Flora’s single bed, Lise giving her friend oral sex before they fell asleep intoxicated from an evening of drinking during which Lisa had also sucked off a boy called Nathan, an incident filmed on a mobile ‘phone, and produced in court.

This is a psychological thriller that focuses on how the witness comes across, rather than the forensic evidence of the murder. The reaction of Lise’s family, friends and those in the courtroom comes under the spotlight but her parent’s seemingly fraught relationship fails to be fleshed out, leaving us in doubt about their exact feelings for one another, or indeed if they are still together and there is no backstory to inform the aftermath of these crucial details. Meanwhile, Lise appears poker-faced and indifferent throughout, sometimes even given a unsettling stare. It’s a mesmerising performance from newcomer Guers. Both her parents express their surprise at the change in her behaviour, both stating that prior to the tragedy she was an open, pleasant and easygoing daughter. Now they start to questions her motives, as well as her innocence.

The Girl With a Bracelet puts the audience in the role of judge and jury as the rest of the courtroom tends to fade into the background. Anais Demoustier (the director’s sister) is powerful as the prosecuting barrister, and Annie Mercier is also convincing as the experienced defence counsel. But Lise’s supreme confidence and aplomb generates considerable tension for all concerned as we start to question if she’s playing us all along as a killer with no remorse, or really is a complete innocent. When this whodunnit from the court room drama genre, the crucial difference here is attitude rather than evidence. And here we are left pondering how we would anticipate a close family member to react when accused of murder, and whether we’d judge them for their behaviour in court, or give them the justice they deserved. The final scenes reveals all. MT