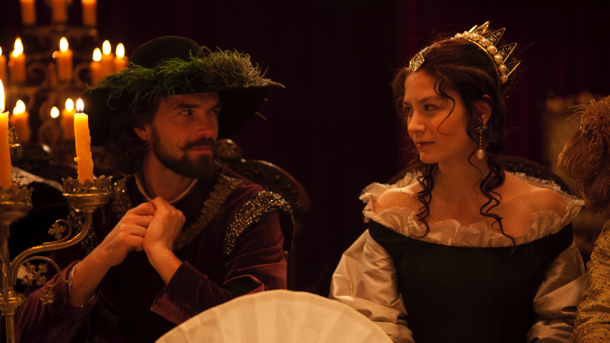 Finnish director Mika Kaurismaki (Road North) and writer Michel Marc Bouchard (Tom at the Farm) join forces for this impressively-mounted historical biopic that focuses on an interesting era in Swedish history. Queen Kristina, who ruled Sweden in the middle of the 17th century, was an enterprising feminist in many ways similar to our own Queen Elizabeth I,  Previously played most notably by the legendary Greta Garbo in Rouben Mamoulian’s 1933 classic Queen Christina; what makes this version special is Kaurismaki’s full throttle slant on Kristina’s lesbian tendencies, where previous adaptations have just pussy footed round the subject.

That Kristina was a fully-fledged lesbian is a bold premise but sadly the film fails to live up to this intended ideal and ends up being just another period drama, albeit a watchable and beautifully-crafted one. This English language production has newcomer Malin Buska as Kristina, and Martina Gedeck as the mother of the only surviving legitimate child of King Gustav II Adolf (Samuli Edelmann).  Tomboyish Kristina becomes Queen as a tiny girl and starts to reign when she is just 18. In masterful form, Michael Nyqvist plays her chief political consultant, Chancellor Axel Von Oxenstierna, advising her on the peace talks during Europe’s religious Thirty Years’ War. We discover how Kristina was an ardent and respected patron of the arts and engaged with Europe’s finest artists and philosophers of the era, such as Rene Descartes (Patrick Bauchau) who is invited to stay at the Royal Palace. But her lesbian love affair with a beautiful young countess Ebba Sparre (Sarah Gadon) and her Catholic leanings (in Protestant Sweden) were the factors that made her unpopular when the going got tough.

Queen Kristina’s is a riveting story of bodice-ripping raunchiness and rich historical intrigue yet Kaurismaki and Bouchard’s offering is tepid in comparison with the real life deal; it is a drama that lacks dramatic heft and we care little for the protagonists or their tragic plights. Much of the problem lies with Bouchard’s script which was clunkily translated into English from its French original and then given to a cast of non-native speakers who do their best despite some real corkers on the dialogue front. Some of the performances are uneven and leave a great deal to be desired including the seduction scene between Kristina and Ebba.

That said THE GIRL KING is a sumptuously crafted historical romp set in some gloriously evocative snowy landscapes, featuring amongst others Turku Castle in Finland and Eschenlohe in Bavaria, but the tone too often veers towards the melodramatic rather than the politically and emotionally resonant. MT

SCREENING IN ARTHOUSE CINEMAS FROM 17 JUNE 2016