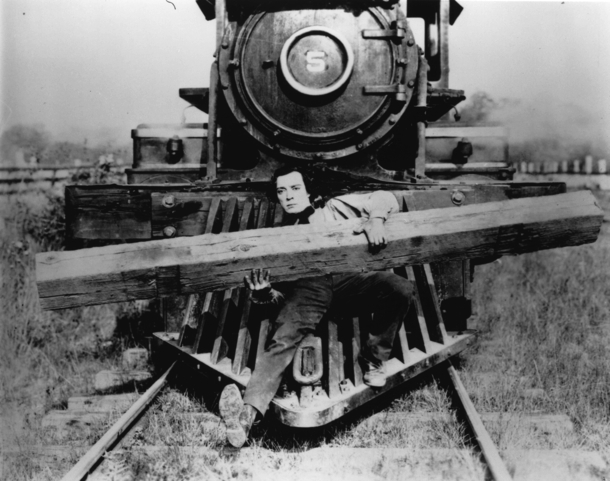 Based on a true incident in 1862 during the American Civil War, THE GENERAL stars Keaton as Johnny Gray, a train driver who tries to enlist in the Confederate Army, mainly to impress his sweetheart Annabelle Lee, whose father and brother enlist immediately. But Gray is more useful to the Southern cause as a train driver than a soldier, and he is rejected in spite of many (comical) efforts. Annabelle, a proud Southern woman is enraged: She will only talk to him again when he is uniform. Soon the dastardly Yankees kidnap the two things Gray loves most: Annabelle and his locomotive ‘ The General’. He swiftly steals another steam engine and pursues the enemy, eventually freeing Annabelle and his locomotive.

THE GENERAL is not a comedy, it is an adventure film with comical features, which might explain its lack of success at the box office since the audience expected a traditional Keaton comedy. Another reason for the classic’s poor box office on its original release may be the fact that the film shows the Southern cause  favourably, which will have alienated audiences in the North and East of the USA. But it is Keaton’s work as his own stuntman that’s the most admirable feature of the outing. Whilst wearing his famous poker face bereft of any emotions, he jumps onto driving locomotives, crawls over the roofs of carriages and lumbers wood from carriages into the furnace, whilst the train drives at top speed. He does all this not in a very heroic manner, on the contrary, all his actions teeter always on the brink of failure. Sometimes they even go wrong, for reasons of oversight or clumsiness. Most of the film was shot outdoors in Oregon because the narrow-gauge railroad tacks that were able to accommodate antique locomotives were still in use at the time. It is a miracle that the Keaton/Gray venture succeeds in the end – against all odds of the situations and his own capabilities. He is ‘everyman’s’  hero, triumphing mainly because he expects even worse obstacles on the way ahead. 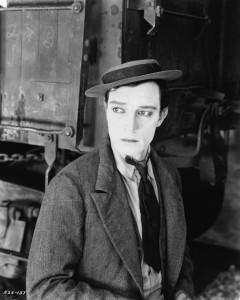 THE GENERAL was a turning point for Keaton, because it lost him much creative control over his career due to the film’s financial failure and resulting in him having to move to MGM. During filming costs kept rocketing. One scene alone (when the Yankee train drives over a burning bridge, which collapses, sinking the train in the water below) cost 42, 000 dollars at the time of production – we can easily add two zeros at today’s cost. The train was actually left in the water, becoming a tourist attraction.

Adapted from William Pittenger’s book “Daring and Suffering: A History of the Great Railroad Adventure” and subsequent memoirs, THE GENERAL has a narrative that keeps the audience engaged all the time and there is always something happening in a tempo that is relentless, even by today’s standard: ‘Action packed’ is not an overstatement. The camera is very mobile, integrating the landscape at all times, and showing Keaton as a small but resilient character, turning the role of prey into hunter. In spite of context of war, the directors never glamourise the army, but make fun of its structures and hierarchies. A visually stunning achievement, with a magnificent musical score by Carl Davis, that remains entertaining  nearly 90 years after its creation. AS

Restored by The Cohen Film Collection, THE GENERAL is back in cinemas from 24 January 2014, opening at BFI Southbank, as part of a larger Keaton retrospective, and selected cinemas nationwide.