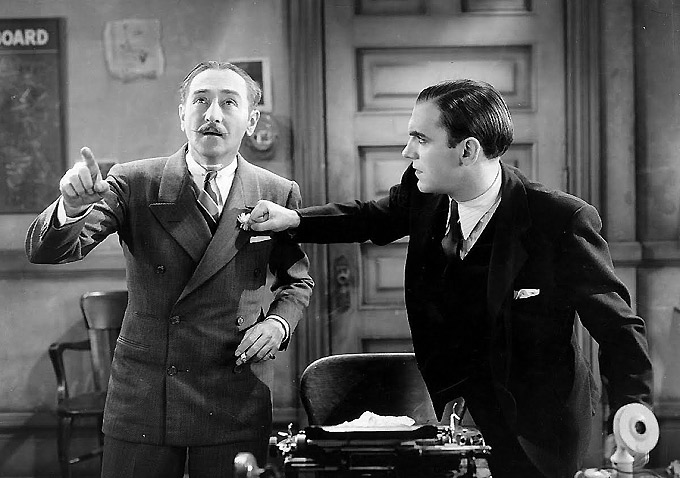 Lewis Milestone directed the first film version of the play by Ben Hecht and Charles MacArthur from 1928, with a very cynical undertone: clearly scripted before the Hays Code came into operation in 1934, THE FRONT PAGE takes a dismal view of human interaction: not only from the point of view of the press, but for society as a whole.

Chicago newspaper editor Walter Burns (Menjou) runs his office like a dictator, and he does not like the idea of his star reporter Hildy Johnson (O’Brien) taking early retirement to marry Peggy Grant (Brian), and live a peaceful life in suburbia. He goes even so far to kidnap the mother of the bride to be, to keep Johnson on board. But when everything seems to fail, the naive communist Earl Williams, to be executed the following day, escapes from jail and hides in the newspaper office. Johnson cannot let the last great story of his career get away: After Williams’ friend Mollie Malloy commits suicide to deflect the police search from Williams’ hideout, Johnson forgets all about marriage and makes a bid to outwit the sheriff and the city’s mayor – whose only interest is his successful re-election. All Burns has to do is appeal to Johnson’s competitive spirit in a newsroom full of journalists complaining that Williams’ early morning execution does not fit in with the publishing schedule of their papers.

The atmosphere resembles a shark colony at feeding time: even the banter is all about put-downs. And nobody is more cynical than Bensinger (Horton), who does not bat an eyelid when he finds a discarded woman’s slip in a drawer – casual sex is just part of the game. Everyone rats on everyone else, alliances are as easily forged as forgotten. Survival in the 1930s is the name of the game, reflecting the dire economic climate, captured by the lovely camera of Glen MacWilliams’ (Lifeboat) who avoids a stagey period drama. THE FRONT PAGE is a vicious portrait of American society in a brutal era, with the frequent, often casual swearing barely camouflaging the underlying violence of a city ready to explode. AS

AVAILABLE ON BLURAY AS ONE OF THE EXTRAS WITH HIS GIRL FRIDAY,  FROM CRITERION UK | please note this disc is not available separately