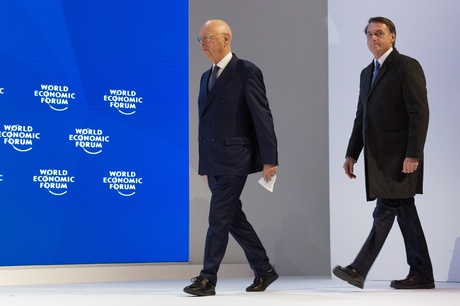 DOK Leipzig opens with this fly on the wall look at the the World Economic Forum, a not-for-profit organisation that takes place in Davos aiming to improve the state of the world through dialogue between leaders across all areas of society. The film centres on Klaus Schwab, the 81-year-old founder of this get together.

German filmmaker Marcus Vetter follows Schwab annual world get together is dealing with burning issues such as climate change, Brexit, the  ‘gilets jaunes’ protests in Paris, and the destruction of the Amazon rainforest among others. Trying to get inside so-called clandestine meetings, And while we learn a great deal, Schwab actually seems ambivalent about the merits of these secret get-togethers of the world’s elite – and for good reason.

The Forum is intended to redress the imbalance between rich and poor, but history tells us that during the 50 years of the WEF’s existence, the gap between the haves and have-nots has grown exponentially – the middle classes, once the heartbeat of any society, are being slowly eroded.

Vetter sees the annual Davos meetings in a critical light, although Schwab claims he has always invited candidates seeking to question the way things are run by politicians and business leaders. There have been cancellations in the past by the self-acclaimed elite: a case in point was when Schwab invited a Brazilian Catholic leader, whose opinion were very left-wing. And while we watch Donald Trump being fawned over at the 2018 meeting, Greta Thurnberg and Jennifer Morgan of Greenpeace have much to say. The rainforest discussion between the Al Gore and the Brazilian President Jair Bolsonaro must also have been worthwhile.

Vetter obviously likes Schwab but he maintains his detached approach: “I believe he has achieved a lot, but that does not mean the meetings are not questionable affairs”. What is most interesting is the role of the invited CEOs. Discussed issues involving imported cotton, they dictate the terms and the many head of states concur. It is clear who is in charge and who is simply the executor of big business. The protests against climate change, Brexit and the rise of populists all over the world are directed against the current head of states, but it would be much more honest and efficient to discuss these burning issues with the CEO instead of the politicians. They can hardly be more intransigent than Donald Trump.

DoP Georg Zengerling’s images of Davos feel like a parody; the head of states arriving in their helicopters; the security details – like something out of a James Bond movie. And the small talk of the self-styled elite is no more lofty than that of a group of provincial business men. Clearly, this is not the tenor of a debate Schwab might have had in mind fifty years ago when he dreamt about how to discuss future problems and reflect; it is just an opportunity for big business, to cultivate new contacts and deals, whilst the politicians look on, waiting to be replaced without any one noticing. AS