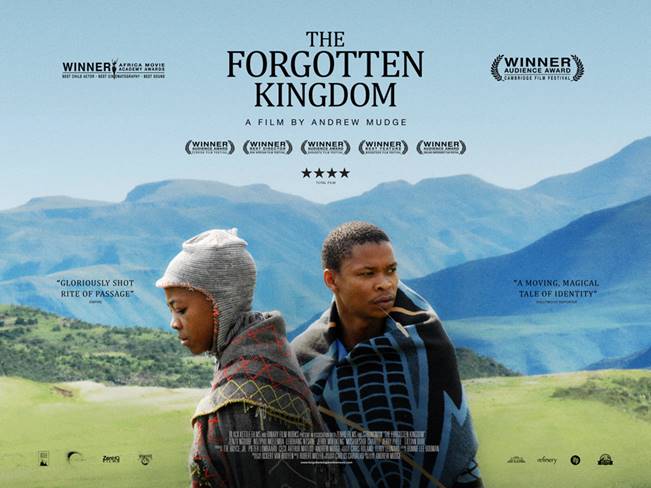 A young man living in Johannesburg, South Africa, discovers unexpected enlightenment and redemption when he is forced to make a journey back to his Lesotho birthplace in Andrew Mudge’s perfectly pitched indie debut THE FORGOTTEN KINGDOM, another story of father/son estrangement.

Atang (Zenzo Ngqobe) has a buzzy life surrounded by friends and family in downtown Joburg. But duty calls him to his estranged father’s death bed in Lesotho. By the time he arrives the old man has already died of HIV, in a small remote village in the mountains, and Atang must give him a decent Christian burial. Set on the widescreen and in intimate domestic scenes, this magical modern parable is really brought to life by D.P. Carlos Carvalho’s stunningly limpid visuals that convey the luminosity of the South African countryside and the vibrancy of its people and customs. As Atang grudgingly connects with the place where he grew up, a low-key love story develops with his childhood friend Dineo (Nozipho Nkelemba), now a teacher, exerting a calm healing on his soul and helping him to come to terms with his complicated past. Atang eventually returns to Johannesburg with a greater perspective on his life and keen to earn enough money so he can make a life with Dineo. What he discovers on his return will be make or break him.

THE FORGOTTEN KINGDOM is one of those charmingly poetic indie films that actually draws you to South Africa to experience its rich culture and extraordinary beauty, in contrast to the stream of overwhelmingly negative stories that come out of a country that is is pictured as being constantly submerged by strife and conflict. Like everywhere, there are positive stories and South Africans want them to be told and while Andrew Mudge doesn’t attempt to paint an overly romantic portrait of this young man’s life, he avoids cliché while acknowledging that Lesotho does have a considerable HIV problem, but is not entirely defined by it. An absorbing narrative, naturalistic performances from a cast of newcomers and experienced actors and Robert Miller’s original and unobtrusive score, THE FORGOTTEN KINGDOM is a worthwhile, intelligent watch. MT

ON GENERAL RELEASE IN SELECTED CINEMAS FROM 21 AUGUST 2015