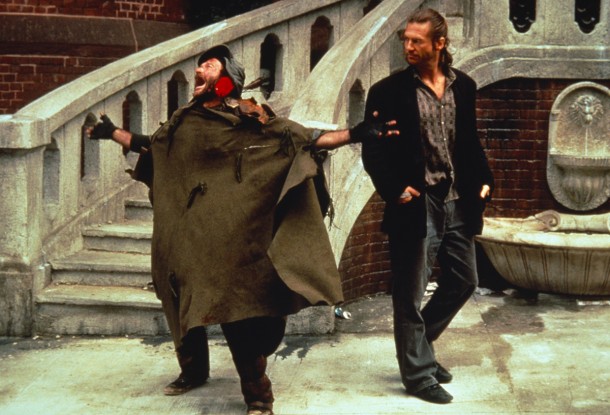 When New York radio DJ Jack Lucas (Bridges) causes a listener to commit mass murder after a throwaway exchange on his programme, his life starts to implode. But the husband of a woman who died in the tragedy ends up being his guardian angel, three years on, rescuing him from his emotional abyss. Professor of medieval history and professional drop-out Parry (Williams) is also a free-thinking maverick who is inspired by the thought of finding the Holy Grail and claiming Lydia (Amanda Plummer) as his prize. In order to assuage his feelings of guilt, Jack sets out on a mission to help Parry achieve his dream. Funny in parts but far too long, Gilliam’s fantasy is part poetic drama, part inventive comedy swinging around deliriously in its spectacular Manhattan locations. Sprawling with wild and ridiculous antics this is an entertaining spectacle enriched by playful performances from Bridges, Williams and Ruehl who won an Oscar in the role of Jack’s lover Anne. Gilliam directs Richard LaGravenese’s witty script, creating a magical modern fairytale for all to enjoy. MT.