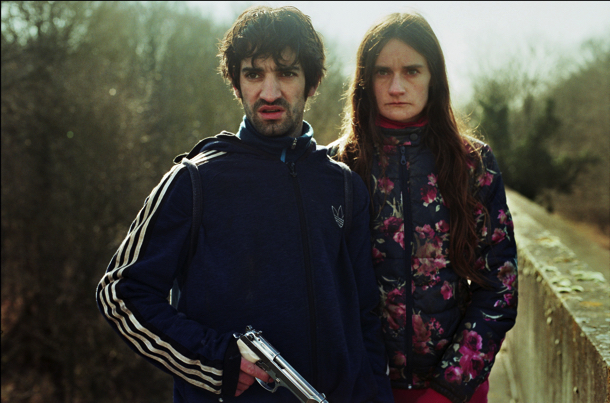 Under glowering skies in Flanders, two hired bounty hunters, Gilou (Bouli Lanners) and Cochise (Albert Dupontel) set off into a wintry widescreen wilderness on a ‘secret mission’ to track down a mobile phone containg some kind of explosive. More madcap Western, than gritty thriller Bouli Lanners’ fourth feature sets off as a miserable, monosyllabic mission that meanders into gloomy backwaters at the arse-end of progress somehow find redemption through its crisis-ridden yet humane craziness as the argumentative duo brush up against a selection of weirdos and ne’dowells: a deranged young couple (who come imto possession of the mobile unaware of its significance) mendacious cleaners and a crippled carefaker and evangelist priest (a kindly Philippe Rebbot),make strange bedfellows in this cinematically spectacular outing where the tone is slightly tougue in cheek, and the dialogue as off the beaten track as its characters.

But their brazen attempt at being gangsters soon falls by the wayside as Gilou abandons the mission with a dicky heart and takes up refuge with the kindly, crippled caretaker (a suitable soulful Michael Lonsdale). Clara (Suzanne Clement) comes to the Cochise’s rescue offering him sparkling sexual chemistry and a shred of domestic normality in her farmhouse.  Meanwhile the deranged young couple also seek a safe berth with Clara, hotly pursued by another bunch of hoodlums who are also looking in for the phone. Esther (Aurore Broutin) and Willy (David Murgia). It emerges represent Adam and Eve

A metaphor for our loss of faith in society, in each other and with ourselves in general, The First, The Last is a dark and often doom laden affair suffused with welcome bone dry humour. Bouli Lammers finds the he answer in love: love for ouselves, for each other and for the world that we have been given. With the twanging score of original guitar music by Pascal Humbert, Bouli Lanners’ characters all experience their crisis-fuelled epiphanies in this God-forsaken landscape that somehow finds the light at the end of the tunnel reminding us that God is out there somewhere if we look hard enough and keep our sense of humour. MT