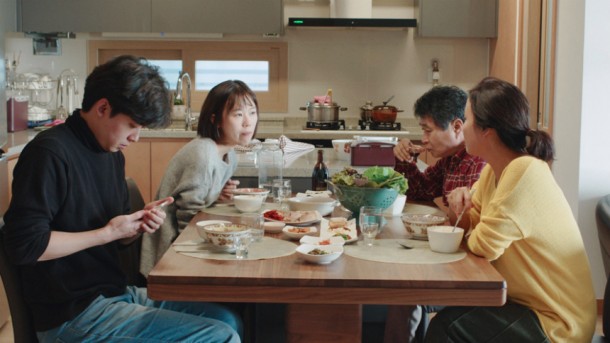 Kim Dae-hwan follows End of Winter with a slim and slowing-moving domestic character-driven piece that had its international premiere in the Filmmaker of the Present competition in Locarno 2017.

Ji-young and Su-hyeon have been dating for several years in a relationship characterised by its visceral closeness rather than sexual passion. When accidentally falls pregnant the couple visit their respective parents who urge them to do the respectable thing and provide a stable home for their baby.

THE FIRST LAP feels contemplative and freewheeling as it explores the fluid dynamic between its protagonists, observations them dispassionately with scant dialogue against a background of political turmoil – such as last winter’s candlelight protests that led to the impeachment of Park Geun-hye.

Performances and strong and subtle with Kim Sae-byeok (The Day After) convincingly natural as Ji-young, surpassing her feelings of panic at her sudden change of circumstances. For his part, Cho Hyun-chul, makes for a more playful character as Su-hyeon in a coupling that feels more like a friendship than a romantic union. Well-crafted but unremarkable, THE FIRST LAP is a realistic look at a millennial love. MT