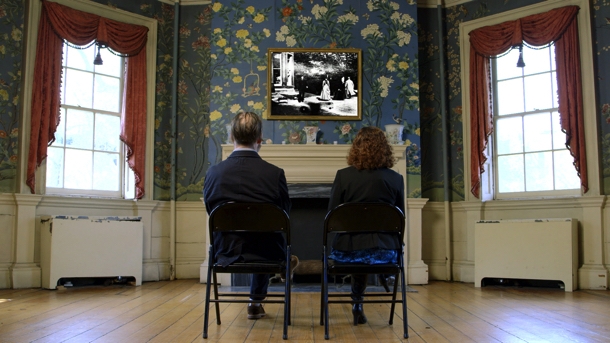 Over the past thirty years the Leeds born filmmaker David Wilkinson has tried to prove that Leeds was the cradle of filmmaking even though the inventor in question was the French born Louis Le Prince. Somehow overshadowing Wilkinson’s quest is a riddle, worthy of any detective film: Louis Le Prince disappeared without a trace on September 16th 1890, after boarding the Dijon to Paris express: he never arrived at his destination; his body was never found.

Louis Aime Augustin Le Prince was born in September 1841 in Metz. He soon became acquainted with the photographer, Louis Daguerre, a friend of his father. Young Louis spent many hours in Daguerre’s studio. Later he would study painting in Paris, after graduating in chemistry at the university of Leipzig.  Louis saw active service in the Franco/Prussian war in 1870, after taking part in violent demonstrations. At the beginning of the 188os journeyed to the USA, where, amongst other activities, he was an agent for French painters. In 1887, after having developed a 16-lens camera in New York – Wilkinson has unearthed some ‘moving’ pictures – he went to Leeds, England, then a hotbed of innovators and artists. Here he shot on the 14th of October 1888, with a newly developed One-lens camera, the “Roundhay Garden” scene, where the participants not simply walk, but follow some instructions from the ‘director’ (Wilkinson can retrace the exact date, because one of the women in the film died a few weeks later).

Le Prince also shot a documentary with horse carts on Leeds Bridge, a pedestrian crossing. In 1890, Le Prince, who had patented his 16-lens, as well as the One-lens camera he used for the ‘Roundhay Garden’ scene, in Great Britain and planned to go to the USA, to lay claim to his invention there. Before his journey to the USA, he visited his family in Bourges, and on the 13th of September he arrived in Dijon, to visit his brother. Three days later, his brother was the last man to see him alive, boarding the Paris express. He never arrived, and passengers reported no incidents during the journey. Suicide, fratricide or murder (on behalf of Thomas Edison, a rival inventor who later claimed the single right to the patent) are all possible. The latter ‘perp’ is perhaps the most probable, since Louis’ eldest son Adolphe later fought in an US court to have Edison’s claim as the sole inventor nullified; Le Prince junior won on appeal, but died two years later under mysterious circumstances during an outing whilst shooting ducks.

Wilkinson tells the story of the “first” cinematographic event vividly, displaying an awesome knowledge of the rival inventors, coming to the conclusion that Le Prince only beat his nearest rival by a few days. There are not too many ‘talking heads’ in THE FIRST FILM and the archive material is nothing less than stunning. But somehow, the chronicle of the first movies is overshadowed by the mysterious disappearance of Louis Le Prince. Wilkinson has even unearthed a photograph of a man resembling Le Prince, who was buried in November 1880 – a man ‘of standing’, who had drowned. But try has he may; succeeding in all other respects, the director cannot solve the death of the man who (most probably) ‘directed’ the first movie. AS