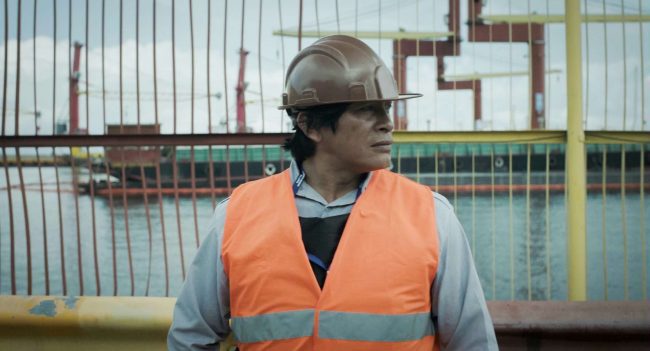 Maya Da-Rin’s stunning feature debut is a beguiling exploration of cultural identity seen through the eyes of a modest indigenous Brazilian Indian torn between Manaus, the port city where he works as a security guard, and the call of the wild in the Amazon village of his birth.

We first meet 45 year old Justino – newcomer Regis Myrupu – going through the daily grind: a bus takes him in the early morning to start his first day in the new job where he is almost dwarfed by the enormous containers he will guard in the dockyard. Back home at night he joins his family in a welcoming ramshackle dwelling where they eat dinner together. Although he is now a widow, his adult daughter still lives at home and is preparing to study medicine in Brasilia.

This alluring family drama positively pulsates with the heady rhythms and ambient sounds in the vast state of Amazonas; the whirring of cicadas and exotic birdsong  – you can almost feel the sweltering heat and tropical downpours that occasionally bring relief. Da-Rin absorbs us into a gentle hypnotic way of life. A member of the indigenous Desana people, who are Christians, Justino is tough, resilient and well-versed in the ways of the forest but he must now adapt to city life, which is out of sync with nature and his upbringing. He he doesn’t complain and refuses to accept benefits offering by the company as part of his “indigenous condition”.

The sounds of the city are also different and less seductive, the clanking and jarring of metal and shrill ringing of alarms. DoP Barbara Alvarez – from the 2004 classic Whisky – again enchants us with elegant framing and a vibrant colour palette reflecting the geometric shapes of the shipyard and lush forest scenery both on the widescreen in more intimate close-up as the increasingly unsettling narrative plays out with its cultural references to Desana folklore, comparing and contrasting life in the country and town.

The tone grows more urgent when Justino develops an unexplained sweating fever but he is reluctant to investigate further, preferring to soldier on stoically. Eventually the doctor runs tests, but Justino has no faith in 21st century medicine, and the results are inconclusive anyway. Eventually Justino is drawn back to the place where he grew up, to seek the answer from the depth of the forest in this captivating, atmospheric but rather too enigmatic feature. MT