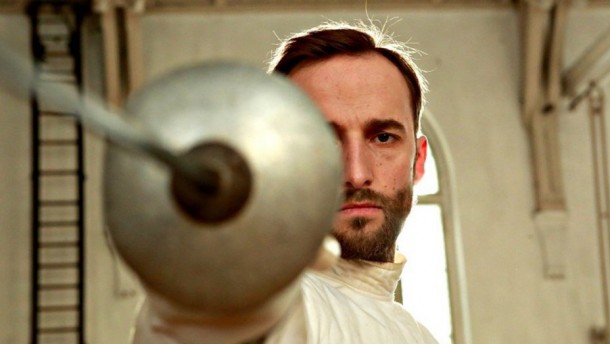 Klaus Haro’s drama THE FENCER is a smalltown old-fashioned drama with universal appeal making it ideal as the country’s submission for the Best Foreign Language Oscar. Set in Estonia during the Soviet regime, it lacks the dramatic heft or character development for really engrossing viewing, veering towards clunkiness in its overly didactic approach. A rather stolid and pedestrian experience then, despite being impeccably filmed and impressively mounted.

It follows the story of Endel Nelis (Mart Avandi) who we first meet in 1952 when he arrives in the small town of Haapsalu in Estonia, which was under the Stalinist rule. Athletic and entrepreneurial, he starts up a fencing club which is soon the talk of the town where he meets young Marta (Liisa Koppel) and Jaan (Joonas Koff) and soon falls for Kadri (Ursula Ratasepp). But the fly in the ointment is the stern head master (Hendrik Toompere), who takes a dim view of his sporting activities simply because swords are involved. Coming up against the locals, the frustrated head master decides to undermine Niels’ popularity and begins digging for dirt on his rival, aided and abetted by a hostile political climate that is open to any kind of controversy and always ,ready to pursue negative claims against individuals.

And it does appear that Niels has something to hide in Estoni, but he is drawn between sporting heroism for the nation in an upcoming fencing tournament, and risking his own life by playing into Moscow’s hands. Kadri supports him with romantic gusto as the two lead their fellow Estonians into battle against the superior Russian team, a metaphor for Communism in its purest form. This is a rousing if rather reductive drama based on imagined events; a codicil confirms that the real Niels lived through the reign of terror finally dying in the 1930s but is still remembered for his fencing club. MT