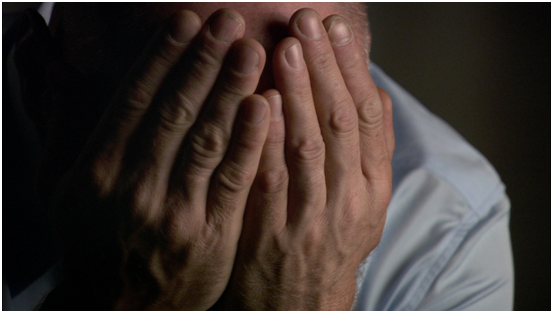 Hopefully, it’s not often that you’ll find yourself listening to an endless stream of drivel, delivered by an arch criminal, albeit a well-dressed and articulate one. But this is what you get with arthouse indie THE FEAR OF 13.

Director David Sington (Thin Ice) has been making award-winning films all over the world that have ‘freed the innocent and convicted the guilty’. His latest docudrama takes place in the stultifying confines of a small room in the company of ‘Nick’. with filmed excerpts intended to add interest and enlighten us further on his subject’s nefarious past – a ‘convicted murderer’ who has spent the 23 years on Death Row before the advent of DNA testing . For the most part Sington’s film feels like a confessional rather than an account of the salacious past of a murderer. Obviously there are grim details here but nothing worse than one might expect from BBC News At Ten. ‘Nick’ has the soft-spoken, calmness of a true psychopath. The tone is conciliatory and at times even poetic. Revelations spill out, often accompanied by tellingly violent gestures and a percussive tone, sometimes smiles leeringly as he unburdens his soul to reveal a tormented past of high hopes and dashed expectations over a murder he claims never to have committed.

‘Nick’s past is pitted with his unpredictable outbursts and psychotic interludes – stealing, looting, lying, deceiving for the hell of it – but in his calm and mesmerising delivery, these are played down as small fry in the scheme of his hurt feelings and disappointments with life’s setbacks. Self-justification is occasionally proffered: a poor relationship with his father or a perceived rejection by his family. He even claims to have been raped as a small boy, while walking his poodle in the woods. All this aims to justify why he went on to pursue the career of a criminal – that was never really his fault and he refuses to be defined by it – leading to the dream of eventually ‘finding himself a girl and having a family’. Clearly Nick was not interested in learning about morals  or ethical rehabilitation while on Death Row, but he did develop a passion for reading and discovered the word triskaidekaphobia – the fear of thirteen. Was he a murderer though? All is revealed in Sington’s clever third act twist.

Clearly once the sheer amazement at ‘Nick’s brazen attitude has worn away, you find yourself growing bored of this irritatingly narcissistic character who believes everyone owes him a living, and that his criminal ways are justified by his difficult past, all ‘independently’ verified, as we are informed. Cleverly, he goes to dupe the Courts and finally Sington. In a ‘coup de grace’ of the truly passive aggressive, ‘Nick’ petitions the courts to set a date for his execution. Almost like the stalker who claims to have been the victim of stalking, this is the final straw.

Sington’s direction and reasonable pacing allows events to unfold seamlessly, but the undercurrent here is one that encourages sentimentality for this Uriah Heap-style convict who is “ever so umble me lud”. As water tumbles over his chair, representing the ‘ocean of tears’ that this poor, misunderstood man has been through? Sington finally delivers his clever denouement. MT