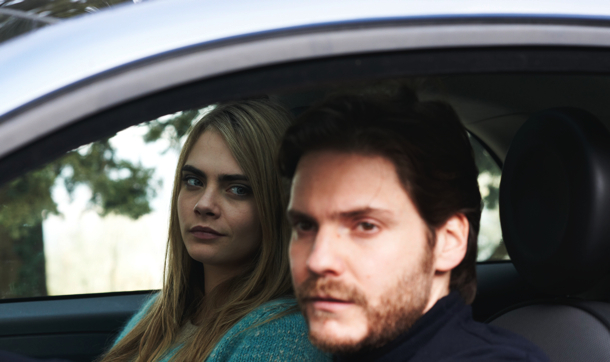 Michael Winterbottom’s latest film captures the mood of uncertainty and transience surrounding the mysterious murder of Meredith Kercher in Perugia in the summer of 2012, tracing the story via a journalist and documentary filmmaker director called Thomas, played by Daniel Brühl. After a disastrous career in Hollywood, Thomas has arrived in Siena to kickstart his career, in much the same way as Colin Firth’s character, Joe, did in the 2008 outing GENOVA.  Both are convincing portraits of troubled fathers, with adolescent kids, balancing their work and family lives while trying to make sense of their personal circumstances in a shifting scenario of contemporary Italy. Winterbottom gives the impression of trying to understand his characters from his own perspective of life.

Once in Siena, Thomas (like Joe) is overcome by visions of his ex-wife, dreamlike sequences in which he’s haunted by murderers as if the medieval city is transpiring with the past to create a unsettling and picaresque atmosphere of dread and mistrust. The dream sequences pepper the middle act of The Face of an Angel. They’re bewildering, involving and entirely disconcerting. While they are nothing to do with the murder he is investigating they create an ambiance of bewilderment that feels appropriate in echoing the mysterious circumstances of the death of the young English student and her involvement with the unusual American, Amanda Knox, that captured the collective imagination and obsession of news audiences all over the World. Michael Winterbottom is trying to tap into the zeitgeist that somehow, through ‘smoke and mirrors’ reporting or handling of the case (by the Media), obfuscation in the events surrounding the murder, allowed proceedings to be derailed.

Thomas becomes involved with two women: the first is Simone (Kate Beckinsale), an American journalist in a similar situation to himself, hoping that she may shed light on the truth of the case, but she, in turn, is involved with local Italian hacks who are a law unto themselves, chasing a story or an angle that may not necessarily reflect the truth of what happened. The second is a young English student, Melanie (Cara Delevingne in a dynamite debut), who serves to allow him to capture the essence of his youth away from the hackneyed hacks. Sadly, neither of these characters bring us anywhere nearer to enlightenment on the murder, or the truth.

There are analogies here with Dante – Beatrice being supplied by Melanie, and the hacks – the various characters from the circles of Hell. But above it all rises the terrible fact that a young and intelligent woman was murdered in suspicious circumstances and little clarity really emerges as to the whys or the wherefores of this terrible tragedy. When somebody dies in unclear circumstances, the press and public seize upon the story, forgetting the victims and their families. The murder becomes disassociated with the bereaved and suddenly belongs to the public imagination. This is both a natural phenomenon and a crass reality that Winterbottom has captured with intelligence and inventiveness. While it doesn’t offer any clues or solutions, it throws up and reflects something deeper to ponder upon. MT