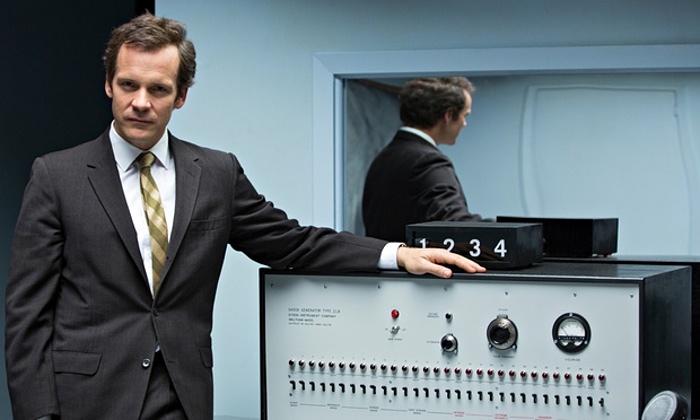 Peter Sarsgaard leads with a haunting and humanistic performance in this serious and well-crafted biopic of the controversial social psychologist Stanley Milgram who grew up in America, the child of Romanian and Hungarian Jewish refugees.

Cleverly reminding us of the Holocaust without placing it at the forefront, Michael Almereyda elevates this absorbing film with Ryan Samul’s subtle cinematography and Deana Sidney’s restrained set design that never allows it to feel dry or technical. Set in ’60s Yale, a subtle love story simmers below the surface, that of Milgram and his wife Sasha, elegantly portrayed by Winona Ryder. Meeting in a lift during the opening scenes, they pursue a rapid, low-key courtship, both immediately recognising their suitability as marriage partners due to their Jewish roots.

Milgrim’s notoriety was largely the result of “the machine”, a device that he used to illustrate his experiments on human obedience to malevolent authority. During his debatably unethical study, he tricked ordinary people into delivering electric shocks to unseen subjects in another room,  Even though there was no coercion, practically all of them continued with the experiment despite the cries of pain that emerged from the room. In reality there were no electric shocks, but Milgram wanted to prove that people would continue inflicting pain, just because they were told to. The scientist was also known for proving the “six degrees of separation” rule through a Harvard mail experiment.

Peter Sarsgaard gives a melancholy performance but one which manages to be both seductively sinister and authoritative. Quoting from  Søren Kierkegaard (“Life can only be understood backwards, but it much be read forwards’), he is quietly spoken and detached yet full warmth and acceptance for both his co-workers and his wife and children; never coming over as condescending or boffin-like. The only thing that marrs EXPERIMENTER is the appearance of an ill-advised beard that sprouts suddenly on Milgram’s face after the birth of his two children; adding an unintentional comic element to the proceedings. There is also a scene that features a man playing William Shatner in the TV movie The Tenth Level, that was loosely based on Milgram’s book. Sasha claims that this character turns him into a “goy” (non-Jew) where in fact Shatner is Jewish, and Sarsgaard is not.

The central theme of the film continues to be the main central experiment and the stark and unbelievable reality – backed by science – that most people continued to press the button, ‘harming’ their fellow men, despite their sheer abhorance of the facts and their subsequent disbelief.  Highly recommended. MT