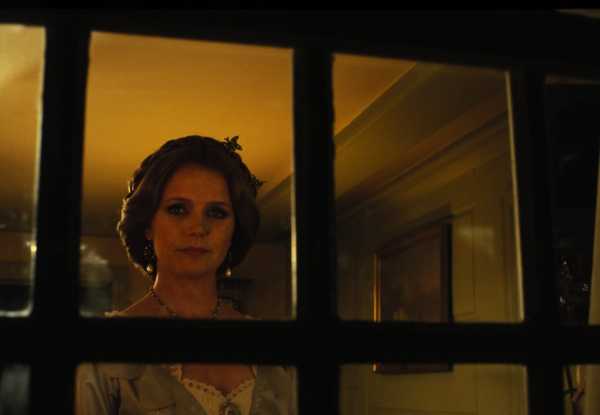 This is the first Henry James adaption by director James Ivory and screenwriter Ruth Prawer Jhabvala. The Europeans (1984) and The Golden Bowl (2000) were still to come. The choice of titles makes it clear the filmmakers went for frothy parlour stories, and not the cruel social satire that would follow in Wings of the Dove (1997). The Europeans as a feature film is pure Henry James with Jhabvala clinging to the page, and DoP Larry Pizer going all out for dazzling colours in the New England autumn.

The Wentworth family are staunch WASPs, slightly repressed, but their wealth makes up for any emotional shortcomings. Two bohemian cousins arrive from Europe: the enigmatic Eugenia Münster (Remick), a baroness by marriage, is looking for love, her husband on the brink of divorcing her. Felix (Woodward) is interested in the arts – but neither make much effort to fit in with the Wentworth clan whose gaucheness provides a n entertaining counterpoint  to the siblings’ liberated spirit of the old world. Eugenia has her eye on Robin Ellis (Acton), the most urbane of the Wentworth clan, a merchant who has been to China. But her deceit – and some double crossing involving Clifford (Choate) destroy a happy-ending: she will return to Europe, lying to the very end about the annulation of her marriage to Ellis, who will eventually marry the less exotic but honest Lizzie Acton (Griffith). Felix, meanwhile, decides to stay in the US and opts for a match with Gertrude (Eichhorn).

The Europeans was Henry James’ third novel at a time when he was still moored to his homeland. Script and framing overload the feature with a sumptuous aesthetic, and even though James’s text is untouched, one has the feeling the protagonists’ actions are secondary. Close-ups often stultify the flow of the stately scenes, and this diminishes the characters’ inter-actions. The grand themes are  often lost in the overriding beauty of the visuals – making some crave for more of James’ work, even though The Europeans was very much an early novel, a far cry from the mature and so much more daunting mature work. A mediocre cast does not help, and even though this feature was the most successful of the blooming Merchant/Ivory/Jhabvala trio, it was rather meekly received in box-office terms. AS

NOW SCREENING AS PART OF THE MERCHANT IVORY SERIES ON CURZON WORLD.