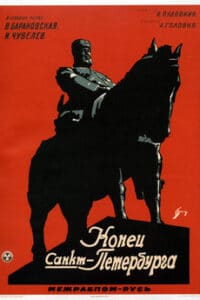 Despite the grandiose and specific title, and crammed with the usual magnificent images one expects of Soviet silent cinema (aided by Pudovkin’s regular cameraman Anatoli Golovnya), this worm’s eye view of the Revolution is as frustrating to watch as Spielberg’s remake of The War of the Worlds in electing to show momentous events from the perspective of a humble onlooker (Ivan Chuvelev) stuck at the back with a rather poor view of what is unfolding, and assumes a detailed knowledge on the part the audience (which may well have existed in 1927) of – say – the role of the First World War in the fall of the Romanov dynasty to fill in the gaps.

Pudovkin, like Eisenstein, had considerable resources at his disposal when he made this tenth anniversary celebration of the Russian Revolution, and the money’s up there on the screen, but without the cinematic exhilaration of Eisenstein’s October. No film about the Revolution seems complete without its visit to the Winter Palace, however, and The End of St.Petersburg concludes with Pudovkin’s original ‘Mother’, Vera Baranovskaya, wandering into the Palace and up the central staircase without encountering a single other person. How many authentic proletarians in 1917 really wandered about the building so casually in the Revolution’s aftermath? (Just as how many shareholders ever actually visit the sweatshops from which their wealth derives, like the guy in the Hitler moustache and stiff collar who introduces himself to the hero while he’s stoking a furnace?) Richard Chatten