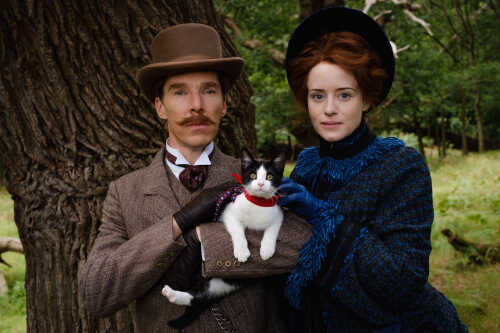 The Electrical Life of Louis Wain (2021)

Louis Wain’s paintings of anthropomorphic cats changed the human perception of our feline friends forever. In his whimsical if uneven imagined biopic drama Sharpe raises the profile of the lesser known English artist in a conventional hyper-emotional approach that borders on a TV soap, but its solid cast and the wacky subject will certainly appeal to cat lovers, and Olivia Colman’s narration is exquisite.

The Electrical Life stays clear of any sensational rumours about the artist’s mental decline which seems to go hand in paw with Wain’s prolific output in In the early 1880s the shy and introverted Wain (Cumberbatch) is heading up the London home of a family of six women after the death of his father. Of his five sisters Caroline (Riseborough) would have been better suited suited to the task of pater familias but Louis does his best with his meagre artist’s income, leaving his secure teaching job, and counting the editor of the London Gazette, Sir William Ingram (Jones), as a client, along with the New York Hearst Newpapers where Louis visits in 1907. Marriage to the family governess Emily Richardson (Foy), who is ten years his senior – was a scandal in those days, but a move to Hampstead, where they adopt a stray cat, calling it Peter, changes Wain’s artistic outlook forever. Louis’ work is very popular, but as a businessman he is less successful and the tragic death of his wife puts a dint in his morale and ultimately leads to his downfall.

In fact mental health issues dog the entire family – his sister Mary (Squires) has to be committed to an asylum – and Louis himself suffers the same fate in 1924, entering the pauper’s ward of Springfield Hospital, Tooting. A year later, a campaign was launched to have the artist relocated to the Royal Hospital Southwark ((where H.G. Wells was a patron) and then the Napsbury Hospital near St. Albans, which had large gardens and a huge colony of cats. In the years before his death, Wain paintings entered a new stage: full of bright colours, flowers and intricate abstract patterns, the cats still the centre of his artistic universe. This repudiates views that Wain had suffered from schizophrenia, which would have resulted in a deterioration of his work. It is highly likely that he suffered from Autistic Spectrum Disorder (ASD).