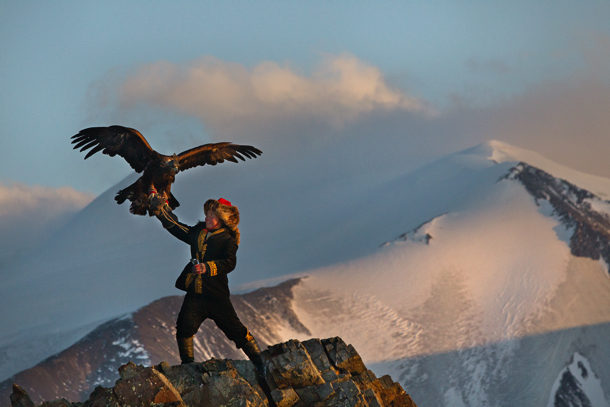 The Kazakhs are a fiesty lot and their kids are no exception, growing up in the hostile terrain of the Steppes with its perishingly cold winters and scorching summers. With echoes of Sergei Dvortsevoy’s drama Tulpan (2008) THE EAGLE HUNTRESS explores the life of a young Kazakh girl who grows up in the remote Altai mountains of Mongolia (west of Ulan Bator) where she has made her mind up to become the first female eagle hunter in twelve generations of her Kazakh family. Theirs is a nomadic lifestyle that very much connects to a global narrative of survival for small communities all over the world.

The feature debut of filmmaker Otto Bell, this is an informative piece of cinema vérité that unfolds in the snug interiors of Kazakh family yurts (with solar panels!) and offers some dizzying, often slow-mo, widescreen aerial shots of this vast and inhospitable region between Russia and China. We first meet the rosy-cheeked 13 year old as she starts her training with golden eagles under the auspices of her father – who looks about 50 but is feasibly in his early 30s.

As you can imagine, this is no cuddly animal story, once trained in the art of – what amounts to falconry – Aisholpan has to descend on ropes down a vertiginous rockface to steal a baby eagle from under its mother’s nose in a nest hundreds of feet above the valley. The eaglet is just old enough to fly but young enough to get accustomed to its new form of captivity where it will help in hunting foxes, before eventually being returned to the wild, according to Kazakh tradition.

The rest of the community is dubious about their women going out to hunt. The elders, in particular, think their females should stay at home and cook and are not adapted to the fierce outdoor conditions – especially during the winter months. But Aisholpan is undeterred and goes on to prove them all wrong in both her competitive skills – where she gets all dolled up with nail varnish and a fancy fur hat – and in endurance tests where she accompanies her father in a gruelling fox hunt that leads them on horseback into deep snow drifts, carrying their eagles aloft.

Daisy Ridley’s accompanying narrative doesn’t quite have the Attenborough touch, making you wish for more salient facts about the Kazakhs and their daredevil lifestyle, but all said and done this is an impressive film, and an ambitious one at that! Wishing Otto Bell the very best of luck his documentary and may he make many more along these lines. MT

ON RELEASE AT PICTUREHOUSES AND CURZON CINEMAS FROM 16 DECEMBER