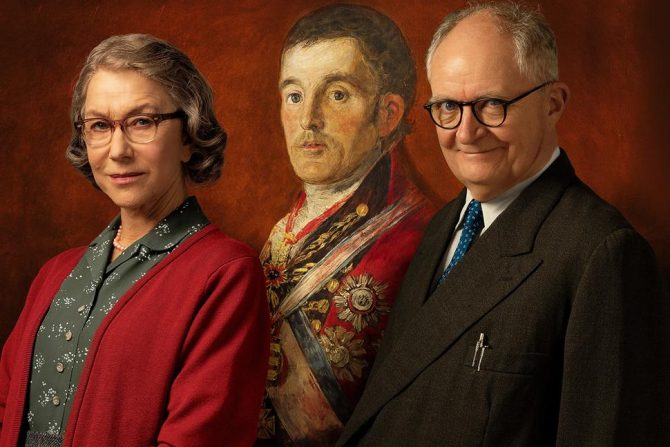 Jim Broadbent and Helen Mirren are the stars of Roger Michell’s jaunty swan song that premiered at Venice in 2020 but has only just been released in the UK five months after his death.

In 1960s Newcastle working class amateur playwright Kempton Bunter (Broadbent) – a cheerful ‘Victor Meldrew’ type – blazes a trail for the common man with his outspoken take on social justice. And while his long-suffering wife Dorothy gets on with the business of living, determined not to let the side down, he nobly flouts the Law.

At the heart of all this lies a poignant sadness for the loss of their teenage daughter in a bicycle accident. A stoney silence has fallen between them on the subject, house-proud Dorothy channelling her grief into cleaning the life out of everything in their crummy red-brick house, and Kempton determined to champion the poor. We feel for them in their efforts to make the best of things. Dorothy works as a char lady for decent local dignitary Mrs Gowling (Maxwell Martin), while Kempton is to be found on his soap box voicing his views. Broadbent is amusing and vulnerable as the down-beaten hero who regularly gets the sack for his forthright opinions. But when he finds out that Goya’s painting of the Duke of Wellington has been acquired by National Gallery, at vast expense to public purse, he oversteps the mark with a plan to “borrow” the work to fund TV licences for the needy.

Richard Bean and Clive Coleman’s script is wittily adapted from a true story and bathed in the golden glow of nostalgia at the expense of dramatic tension. Broadbent and Mirren are the epitome of old-school Englishness, bringing out the humanity in two noble souls who have been through the mill – not to mention two world wars – determined to keep a stiff upper lip without resorting to maudlin introspection in this warm-hearted crowd-pleaser. MT