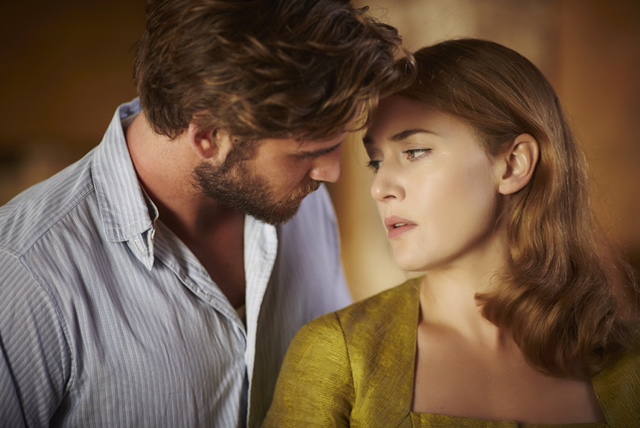 THE DRESSMAKER, Jocelyn Moorhouse’s first feature film as a director for 18 years, is based on the novel by Rosalie Ham. Very much an Australian variation on Friedrich Durrenmatt’s revenge play “Der Besuch der alten Dame”, which has been adapted for the screen – on three continents – more than eight times since 1964, Moorhouse has put literally everything into this: murder, mayhem and cross dressing, all served up in farcical slapstick way.

Set in the early fifties in the small Australian town of Dungatar, the woman seeking revenge is Myrtle ‘Tilly’ Dunnage (Winslet), who was thrown out of the town at the age of ten, after allegedly killing classmate Stewart Pettyman. Having made a career in haute couture in Paris, she returns to Dungatar to get her own back on the backward and hypocritical lot. Her mother Molly (Davis) is no great help, not only is she an alcoholic, bakes wonderful weed cakes for pain relieve – but most importantly, she does not believe in Tilly’s innocence. On the opposite end, hunky Teddy (Hemsworth), believes very much that Tilly has not killed young Stewart (Potter) – but the budding romance is cut short, when Teddy jumps into a grain silo and suffocates. Tilly’s best friend is now Sergeant Farrat (Weaving), a cross dressing police sergeant, who delivers the proof of Tilly’s innocence. When uptight councillor Evan Pettyman (Bourne) is identified as Tilly’s father, his long-suffering wife Marigold (White) kills him. But Tilly is not finished with the lot: her dresses may make the female hyenas of the town presentable, but for an amateur stage competition the dressmaker crosses the ladies of Dungatar: her designs for their rival’s outfits are much superior. Finally, she gives a new meaning to the term ‘tabula rasa’ – ingeniously managing finally to do herself proud.

There are many – perhaps too many – narrative strains in THE DRESSMAKER. Moorhouse unravels the whole history of the town in two hours with many flashbacks and amazing ideas. They are often hilarious as, for example when Tilly, Teddy and Molly watch Wilders’ Sunset Boulevard in the cinema, Molly shouting “Run, run” when William Holden is kissing Gloria Swanson. But sometimes, the execution is over the top, like in the case of Sergeant Farrat’s cross-dressing. There are so many surprises and twists  and one has the feeling towards the end, that less might have been more. But the overall impact is sometimes stunning, particularly Donald McAlpine’s camera work: his sepia-coloured passages in the flash-backs are not romantic, but rather mud and tears. Winslet and Davis are playing perfectly off each other, and Weaving’s gender bent copper is a marvel to watch. Purists may recoil sometimes, but THE DRESSMAKER is a tour-de-force, an exhausting emotional rollercoaster. AS