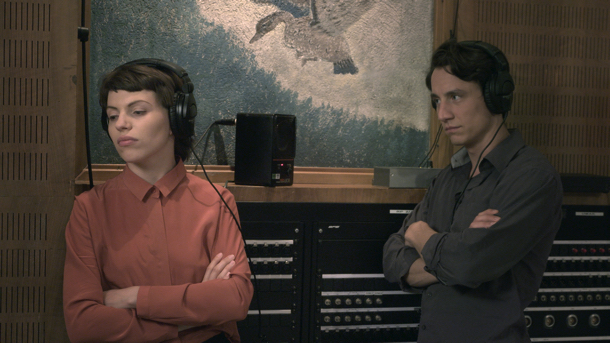 Vienna born director Ruth Beckermann (East of War), explores the relationship between the Romanian born Jewish poet and author Paul Celan and the Austrian poet and writer Ingeborg Bachmann and the unsurmountable emotional conflicts brought about by different parental influences. Celan was a Jew whose parents were murdered in the Holocaust and Bachmann was the child of a committed Nazi.

Beckermann has chosen an interesting structure: two actors read the letters between the couple, dating from 1948 to 1967; including the ones from Bachmann which she never posted. Between the readings, the actors Anja Plaschg (Bachmann) and Laurence Rupp (Celan) talk and smoke and wander around in Vienna’s “Funkhaus” (Broadcasting House) listening to concert rehearsals and dining in the cafeteria. Their discussions are earnest and give the impression of genuine conflict resolution.

Celan and Bachmann only spent a few months living together in the late 1940s, but they were obsessed with each other. Bachmann had great difficulty committing to any long-term relationships, and Celan’s hesitant nature was no help. But the main stumbling block was their rivalry as poets and writers. Both were writing in German, and as members of the literature circle “Gruppe 47” they were fierce competitors. Celan had written the Holocaust poem ‘Death Fuge’ (Todesfuge) in 1945, which was published in 1948. In 1953 Bachmann won the “Gruppe 47” award for ‘Die gestundete Zeit” (The extended hours), while just a handful voted for Celan’s ‘Death Fuge’. As Celan put it: just six people remembered my name. To make matters worse, Böckler, a critic of the West Berlin paper “The Tagesspiegel”, criticized Celan’s “dead language” and insinuated the poet “ gets away with it, because of his race”. This sort of reaction was not uncommon in West Germany after the war where the majority of Germans, including intellectuals, felt sorry for themselves, and transferred their repressed guilt for the Holocaust into attacks on Jews.

Both Bachmann and Celan had two major relationships during their involvement and avid exchange of letters: Celan was married to the French aristocrat Gisèle de Lestrange, with whom he had a child. Bachmann lived with the Swiss writer Max Frisch in Zurich and Italy. Dominated by hatred and self-hatred, their obsession with each other was to end in tragedy: Celan committed suicide in 1970 drowning in the Seine. Bachmann, addicted to Barbiturates, literally set herself alight with a cigarette in bed, and died three weeks later in Rome.

Their mainly unfulfilled love was typically for the decades after the end of WWII, when the emotional chasm between the victims (or their children) of the Holocaust and the Nazis (and their children) was simply too much of a hurdle to overcome, however strong their feelings for each other. Celan and Bachmann simply stood no chance: history overcoming their love .

DOP Johannes Hammel creates loving close-ups of the ‘couple’, and his matter-of-fact shots of the “Funkhaus”, where broadcasting history has been made for the last 90 years or so, is a reminder that these ordinary-looking places have witnessed a violent and changing history. THE DREAMED ONES is a chronicle of despondency and unfulfilled desires in a time over-shadowed with a past which not only lead to the death of millions, but also poisoned the lives of innocent survivors like Celan and Bachmann. AS