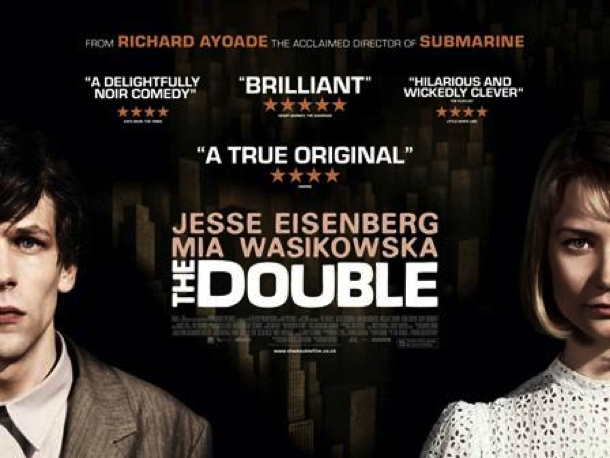 Set in a back-to-the-future dystopia, this doom-filled drama, based on Dostoyesky’s short story, is suffused with all kinds of influences from Kafta to Orwell to Polanski.’s The Tenant.

Richard Ayoade’s follow-up to Submarine, features a similar cast but the main reason to see it is Jesse Eisenburg’s double-act as a troubled young man (Simon) struggling with his identity. Tortured by a mindless existence pushing paper in a faceless organisation and further traumatised by a suicide in the building; he’s then thwarted by a supercilious doppelgänger (James) who appears on the payroll, stealing his professional limelight, threatening to win the heart of his crush and female colleague Hannah (Mia Wasikowska). 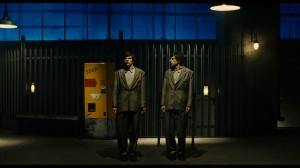 The tone throughout is brooding and unsettling. Suspicion, doubt and fearfulness are constant themes that fuel its edgy narrative. In the same vein as Polanski’s Trelkovsky; Simon’s neurosis morphs into full blown psychosis as he loses control of reality or, at least, of what reality is imagined to be in this warped and sinister storyscape.

Despite touches of brilliance, largely due to Eisenburg (whose angst-ridden persona was pre-honed to perfection in Night Moves 2013), and a suberb cameo from Paddy Considine; The Double feels as cold and uninhabited as a Edward Hopper painting – intriguing to look at but emotionally unable to involve.

THE DOUBLE IS ON GENERAL RELEASE FROM 4 APRIL 2014