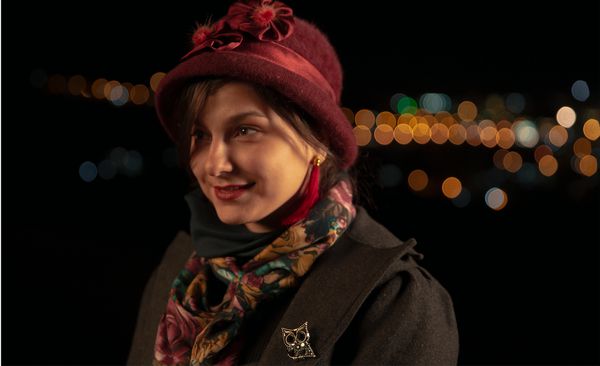 A teenage marriage is viewed through the eyes of friends and family in this weirdly tragic ‘smoke and mirrors’ snapshot of modern Tehran from first time filmmaker Elahe Esmaili.

The ‘bride to be’ in question is 14 year-old Asil, a child trapped in a naive middle-aged woman’s persona, from her bright red nails to her fuddy duddy fashion sense, she cuts an odd figure, simpering like the cat that got the cream. It’s an arranged marriage of sorts. It turns out that a man saw her portrait in her father’s photography studio and decided she could make a good match for his son, who doesn’t make much of an appearance although we understand he is much older and has just finished college. We are fed snippets of information. And as the story unfolds an ‘smoke and mirrors’ story emerges making this intriguing viewing.

Their engaged status means the couple are allowed to spend more time together, Asil’s intended courting his giggling sweetheart with fluffy toys and sweeties, much to her delight. No whiff of pheromones or onscreen chemistry here. In fact, there’s something distinctly unconvincing about this young romance that leads us to believe that Esmaili is not giving us the full facts. Asil’s grandmother suspects there’s more to the match than meets the eye, and we tend to agree – Although Asil is not letting on. She may just be out of her depth, or desperately trying to hide the truth. Family photos from the past see her as a cosseted little angel used to being the centre of attention. Is she caught in a trap of her own making, unable to see the unfolding reality of her situation. Or is the romance wishful thinking?.

The family set-up soon reveals cracks in the facade. Asil’s father Alireza is divorced from her mother – although it’s complicated – and there’s a big question mark about his new relationship. The 35-year old father is struggling to bring up two teenagers in a pokey flat, so money is clearly an issue, raising questions about Asil’s boyfriend’s financial status. Meanwhile, Asil’s intended gives lip service to her pretensions at getting an education. Although you get the impression she may follow the more traditional route once celebrations are over. And as Esmaili delves deeper through a series of telling insights provided by members of the family, radical views emerge along with anecdotal stories. The Doll is a cleverly-scripted tightly-packed look at modern Iran where the paternalistic fist still waits in the wings for those who think freedom is now within their grasp. MT

THE DOLL PREMIERES AT HOTDOCS